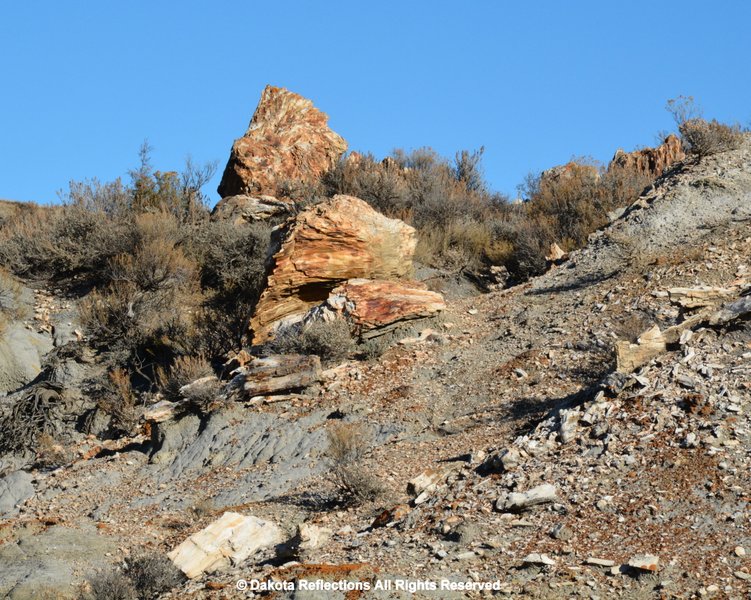 North Dakota has one of the more significant petrified forests (thought to be the third largest) in the United States.  Petrified forests are found in various places in the world and come from trees of different time periods in earth’s history. 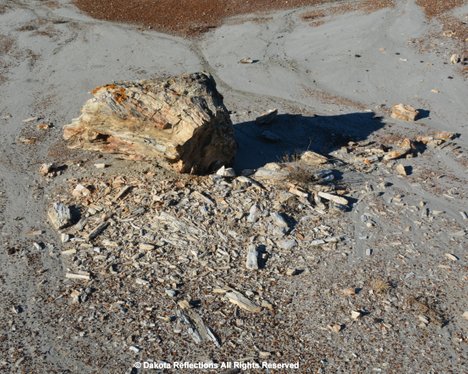 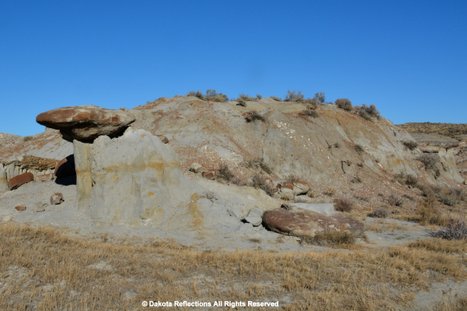 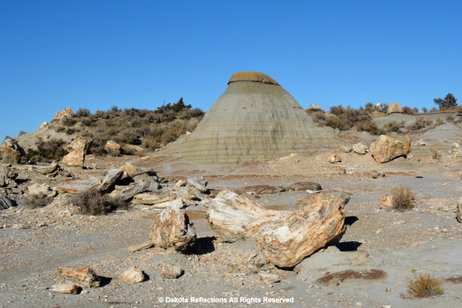 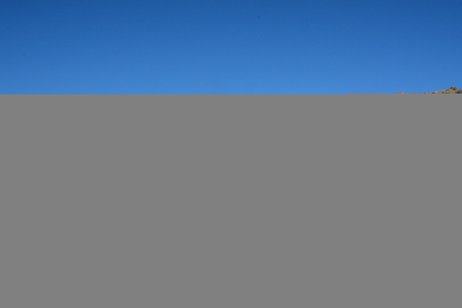 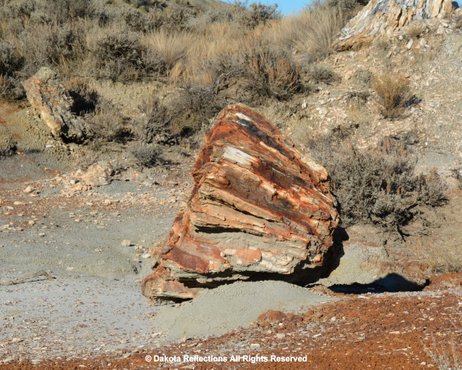 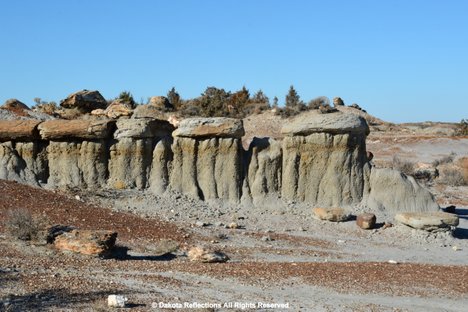 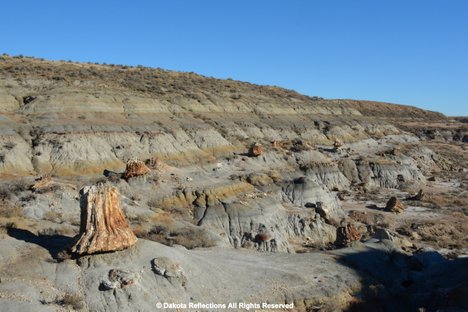 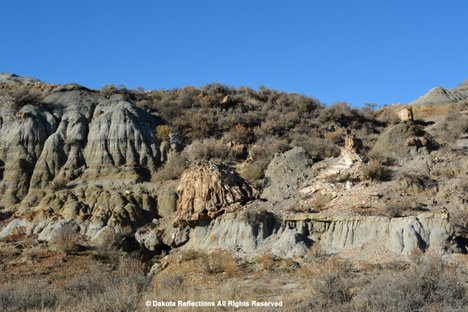 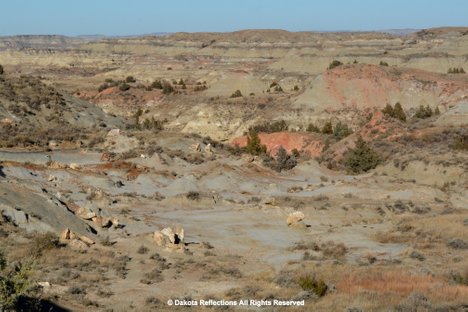 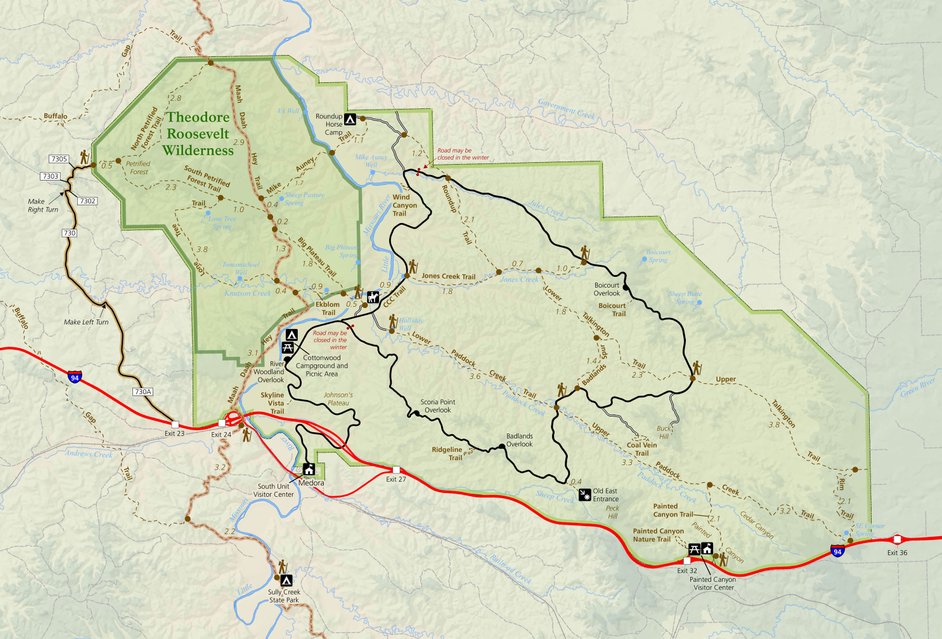 The easiest way to get to the Petrified Forest is to head west of Medora on Interstate 94 for one mile and take Exit 23.  Then turn right on 730A for about 7 miles on gravel road, past a ranch and several oil wells.  Be mindfull of cattle which may wander on the road.  Follow the signs to Petrified Forest and drive to the dirt parking lot.  The trail is easily marked and you need to cross the gated fence.  A short uphill hike of 1/2 mile will lead you to a post on the bluff.  Take a right to cross prairie to the large North Petrified Forest Trail where a valley contains many petrified stumps.  Be wary of bison, they won't move and if they are on the trail, you will need to detour around them.  The trail to the left of the post leads to the small South Petrified Forest.  Plan on at least 2 hours from Medora, about 20 minutes to drive to the parking lot and at least 1 hour at the North Petrified Forest. 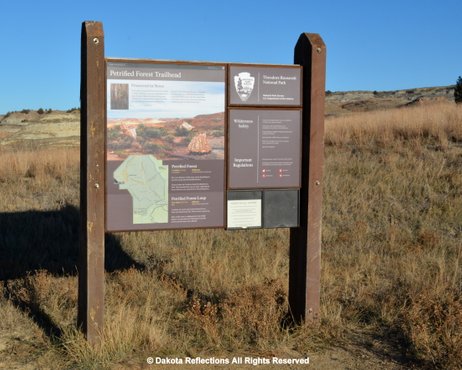 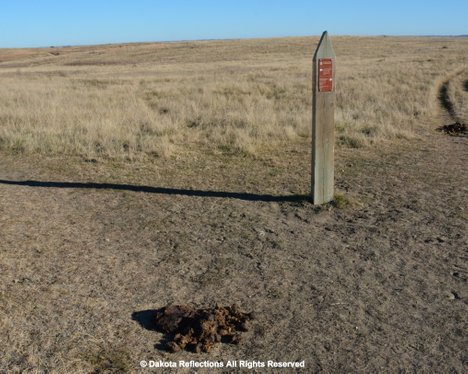 Left to the North Petrified Forest

Right to the South Petrified Forest 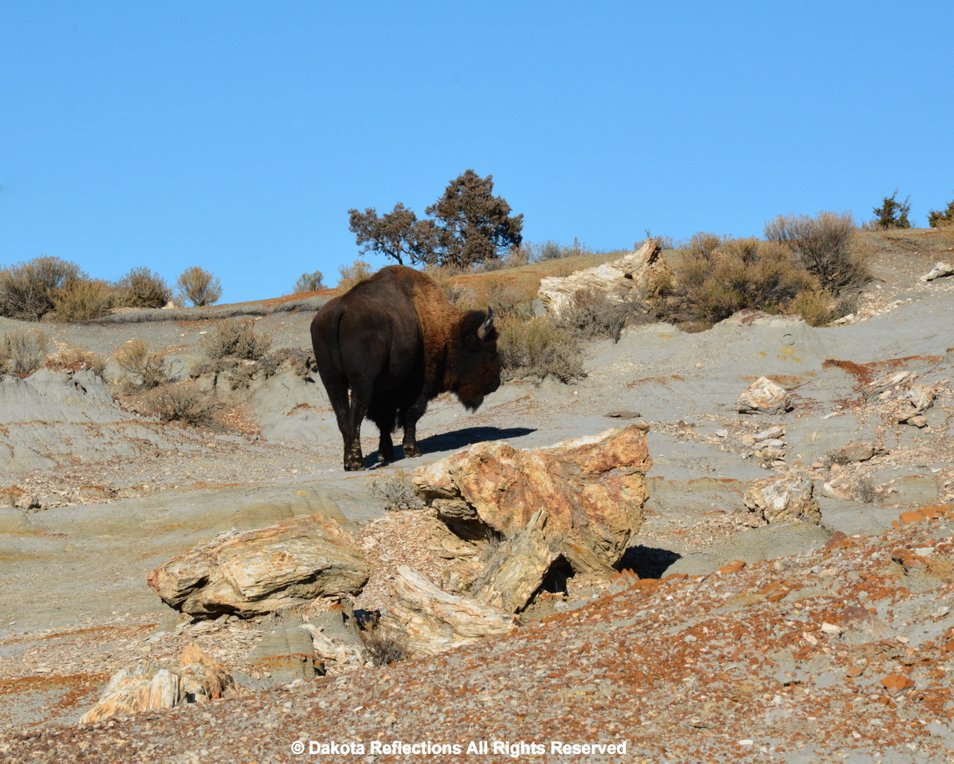 Petrified Forests in the World

How do Trees Become Petrified?

Petrified wood is literally where the wood has turned to stone (from the Greek word petro for stone. Petrifaction occurs when the tree becomes buried and decomposition does not initially occur due to a lack of oxygen from volcanic ash or sediment covering the tree. Minerals such as silica in water deposit in the tree and stone (usually quartz) is formed.  Tree rings can be seen.

Elements in the water make color in the stone.  Carbon can cause the stone to turn black; cobalt, chromium, and copper can result in green or blue coloring; iron can result in red, brown, or yellow coloring; manganese can lead to pink or orange and manganese oxides can give black or yellow.

Western North Dakota was a subtropical forest 55 to 67 million years ago.  Volcanic eruptions from the west or flooding buried trees similar to the modern Sequoia and bald Cypress trees and the Petrified Forest resulted.

The upright nature of the trees in Theodore Roosevelt National Park may or may not have been due to their final resting state.  Studies of the volcanic eruption of Mt. St. Helens showed that displaced trees with remaining stumps settled in an upright position in Spirit Lake.  The fact that most of the petrified trees are stump may indicate that the lower parts of the trees were buried quickly and that the upper tree sections were exposed and then decayed.