Peru is a Spanish speaking county in north central South America with a very biodiverse environment, ranging from the Pacific Coast to the high mountains of the Andes and the tropical Amazon basin.

Machu Picchu was built around 1450 and abandoned approximately 100 years later at the time of the Spanish conquest.  In 1911, Hiram Bingham rediscovered Machu Picchu.  In 2010 we hiked 4 days on the Inca Trail to Machu Picchu. 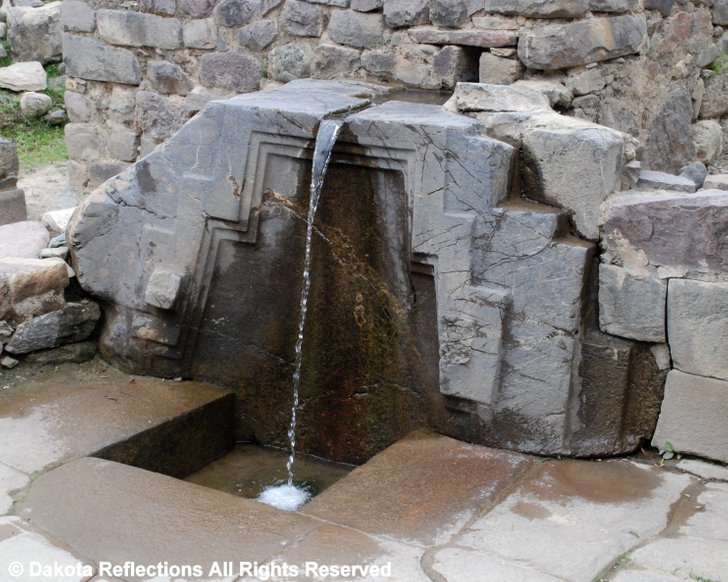 Bath of the Princess Ollantaytambo 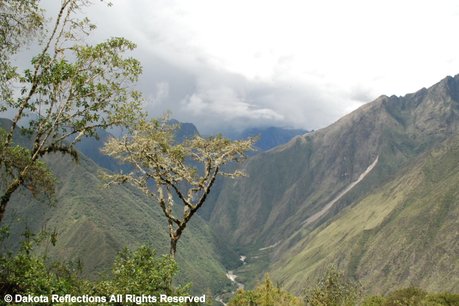 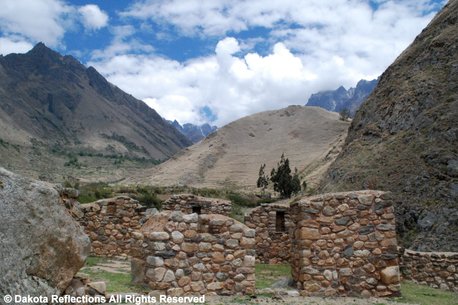 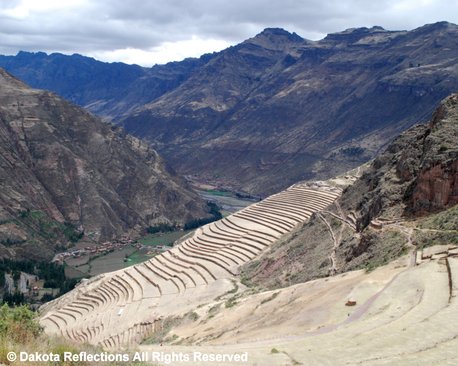 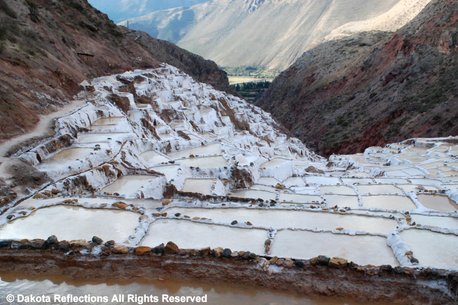 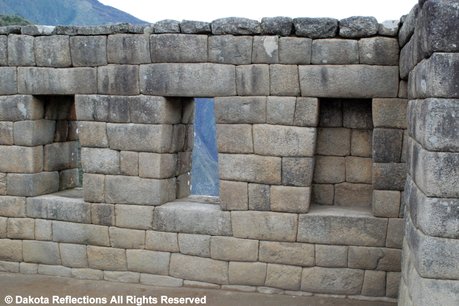 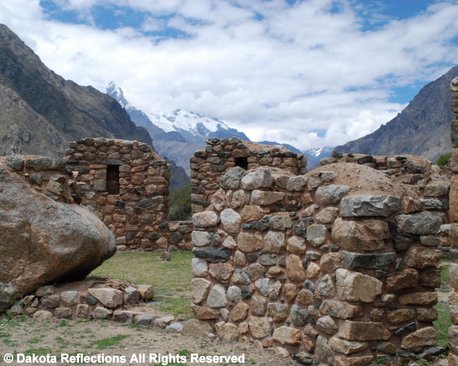 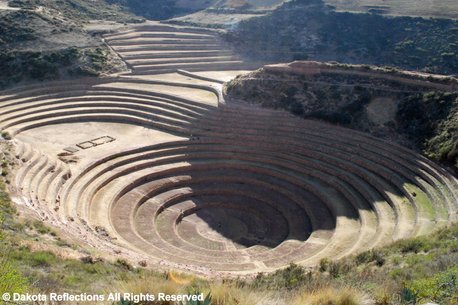 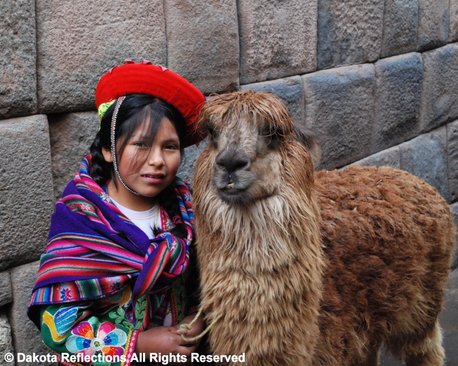 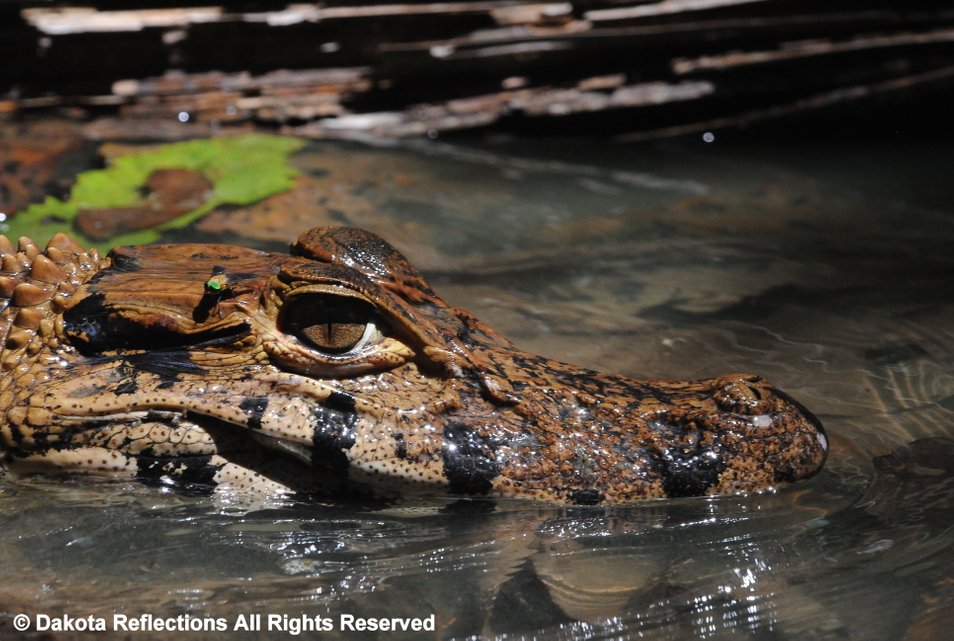 The Black Caiman is a species of large crocodilian and, along with the American alligator, is one of the biggest extant members of the family Alligatoridae and order Crocodilia. It is a carnivorous reptile that lives along slow-moving rivers, lakes, seasonally flooded savannas of the Amazon basin, and in other freshwater habitats of South America. It is a quite large species, growing to at least 5 m (16 ft) and possibly up to 6 m (20 ft) in length, which makes it the second largest reptile in the Neotropical ecozone, next to the critically endangered Orinoco crocodile.  The black caiman is the largest predator in the Amazon ecosystem, preying on a variety of fish, reptiles, birds, and mammals. It is a generalist and apex predator, potentially capable of taking any animal within its range, including other predators. 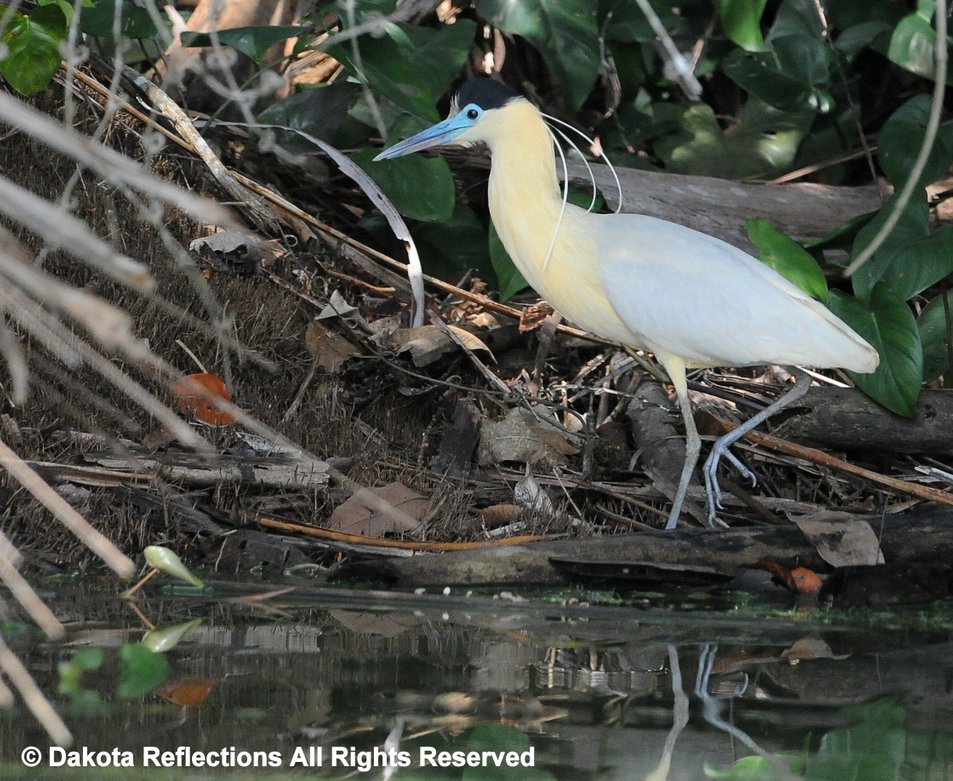 The capped heron is a water bird endemic to the neotropics, inhabiting the Amazonian rainforest from the center of Panama to the south of Brazil.  It is the only species of the genus Pilherodius, and one of the least known of the heron family, Ardeidae. It is superficially similar to the group of the night herons, but is active during daytime or at twilight.  This species is very distinct from other herons, being the only one with a blue beak and face, and a black crown. The belly, chest, and neck are covered with yellowish-white or light-cream feathers. The wings and back are covered with white feathers. Three to four white long feathers extend from the black crown. 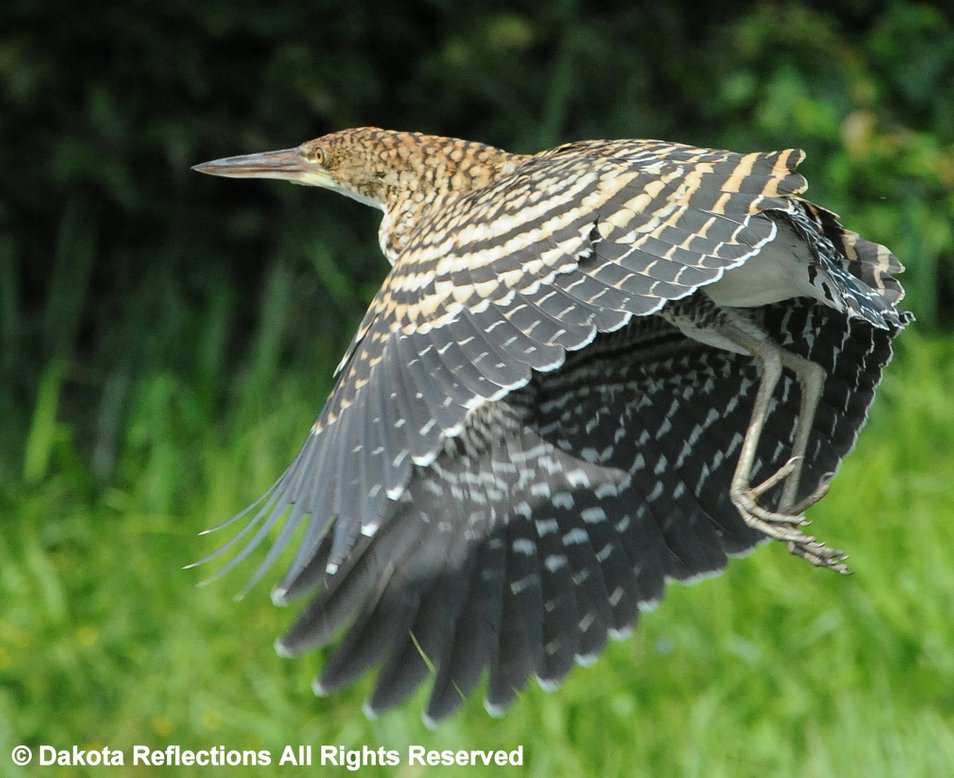 The Rufescent Tiger Heron is found in wetlands from Central America through much of South America. It generally occurs below 500 m (1,600 ft), though it has been recorded as high as 1,600 m (5,200 ft) in Colombia.  The adult rufescent tiger heron is relatively easy to distinguish from fasciated and bare-throated tiger herons, as it is rufous (rather than primarily gray) on the head and neck. Young birds, however, are much more difficult to identify. 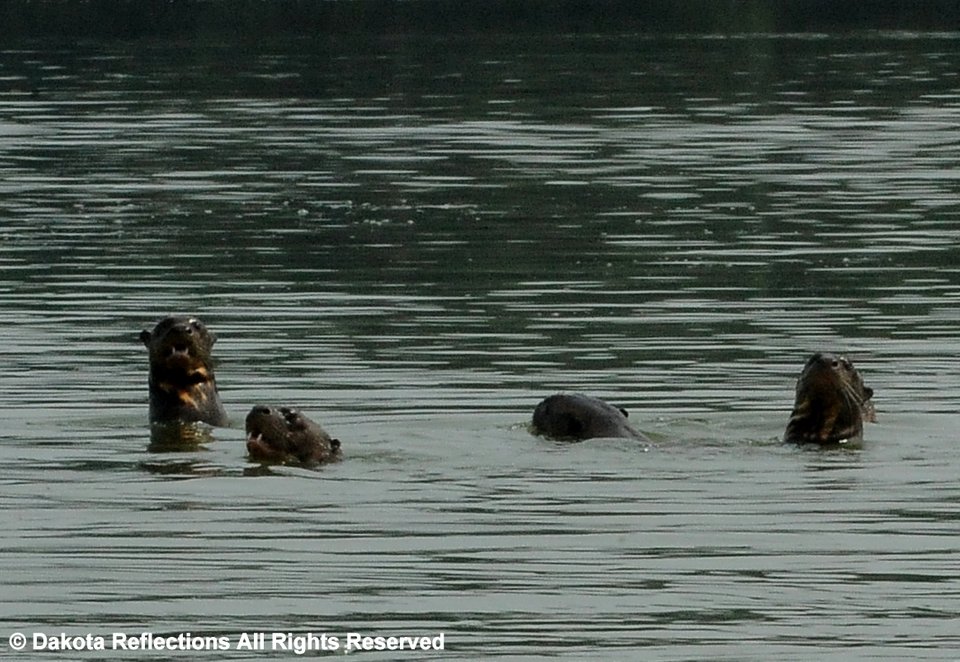 The Giant Otter or Giant River Otter is a South American carnivorous mammal. It is the longest member of the Mustelidae, or weasel family, a globally successful group of predators, reaching up to 1.7 meters (5.6 ft). Atypical of mustelids, the giant otter is a social species, with family groups typically supporting three to eight members. The groups are centered on a dominant breeding pair and are extremely cohesive and cooperative. Although generally peaceful, the species is territorial, and aggression has been observed between groups. The giant otter is diurnal, being active exclusively during daylight hours. It is the noisiest otter species, and distinct vocalizations have been documented that indicate alarm, aggression and reassurance.  The giant otter ranges across north-central South America; it lives mostly in and along the Amazon River and in the Pantanal. 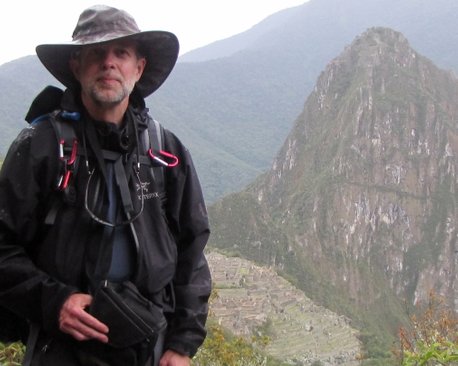 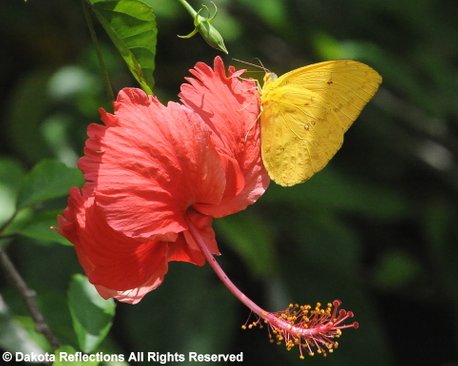 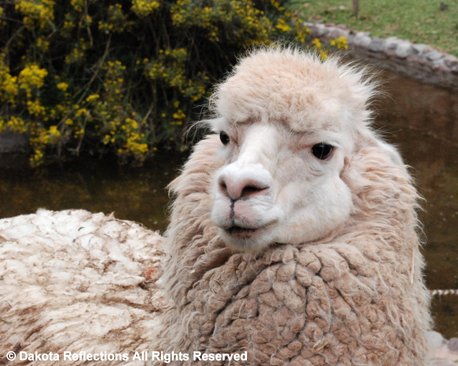 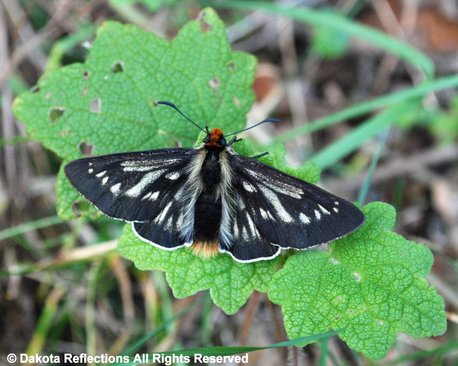 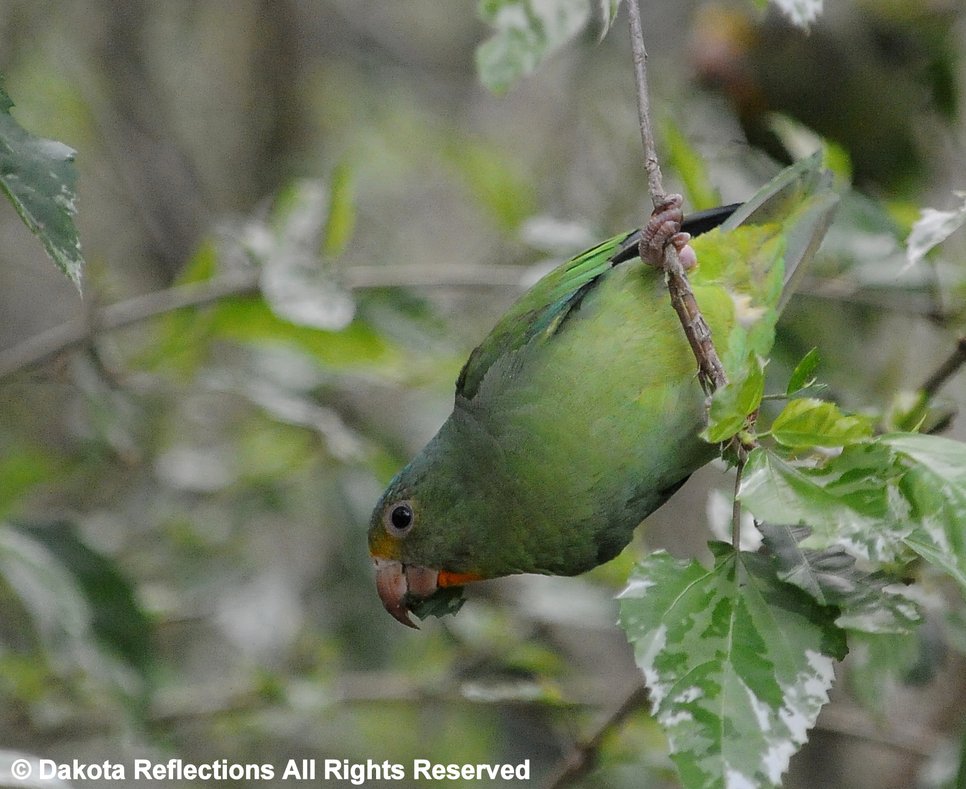 The Tui Parakeet is a fairly small green parrot with slightly darker wings, and a medium to short, rather wedge-shaped tail. It has a yellow forehead-spot, a relatively dark reddish-dusky bill, a complete white eye ring, and dull yellowish or whitish irises.  It is found in the Amazon Basin of Brazil, and Amazonian Peru and Bolivia; also a minor range into eastern Ecuador, and the river border of far south-eastern Colombia. 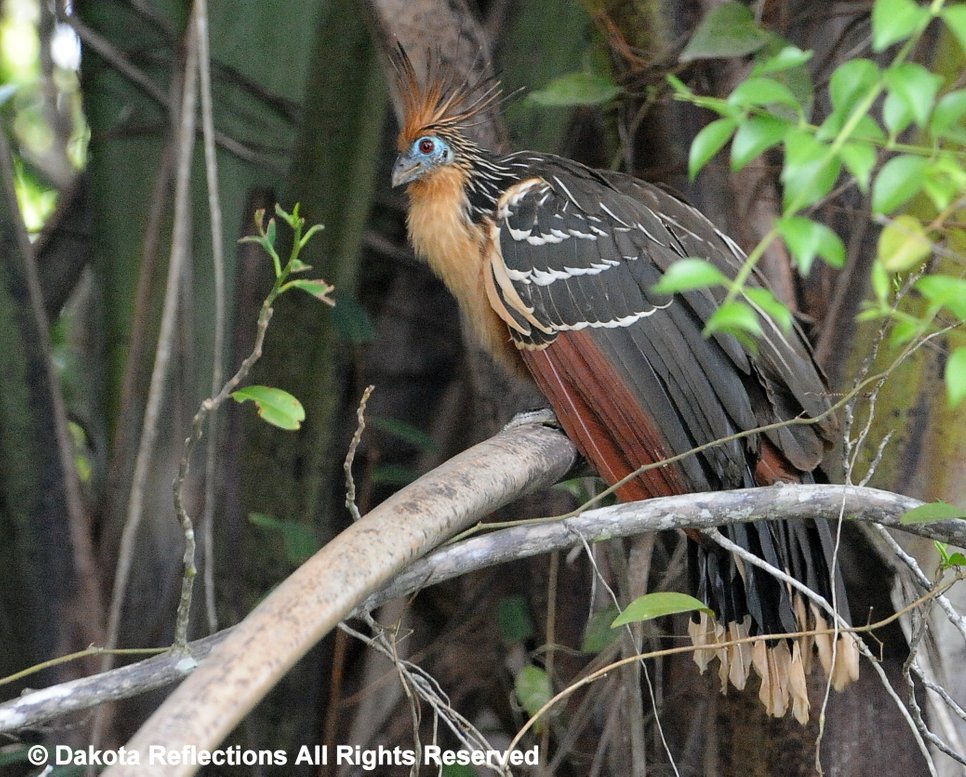 The Hoatzin, also known as the reptile bird, skunk bird, stinkbird, or Canje pheasant, is a species of tropical bird found in swamps, riparian forests, and mangroves of the Amazon and the Orinoco basins in South America. It is notable for having chicks that have claws on two of their wing digits.   The hoatzin is a folivore - it eats the leaves (and to a lesser degree fruits and flowers) of the plants that grow in the marshy and riverine habitats where it lives. It clambers around clumsily among the branches, and being quite tame (though they become stressed by frequent visits), often allows close approach and is reluctant to flush. The hoatzin uses a leathery bump on the bottom of its crop to help balance itself on the branches.  One of this species' many peculiarities is that it has a digestive system unique amongst birds. Hoatzins use bacterial fermentation in the front part of the gut to break down the vegetable material they consume, much as cattle and other ruminants do. Unlike ruminants, however, which possess the rumen (a specialized stomach for bacterial fermentation), the hoatzin has an unusually large crop, folded in two chambers, and a large, multi-chambered lower esophagus. Its stomach chamber and gizzard are much smaller than in other birds. The crop of the hoatzin is so large as to displace the flight muscles and keel of the sternum, much to the detriment of their flight capacity. Because of aromatic compounds in the leaves they consume and the bacterial fermentation, the bird has a disagreeable, manure-like odor and is only hunted by humans for food in times of dire need.