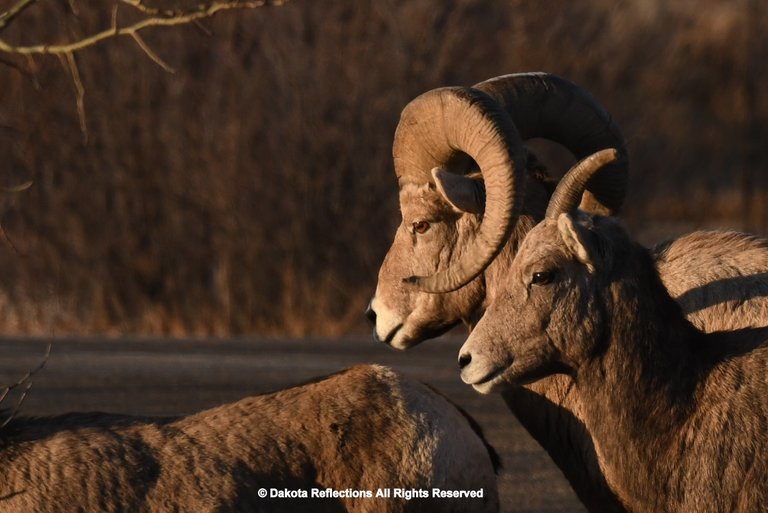 The bighorn sheep is a species of sheep native to North America.  The species is named for its large horns. A pair of horns might weigh up to 14 kg (30 lb); the sheep weigh up to 140 kg (300 lb).  Recent genetic testing indicates three distinct, one of which is endangered: O. c. sierrae (Sierra Nevada bighorn sheep).  Sheep originally crossed to North America over the Bering Land Bridge from Siberia; the population in North America peaked in the millions, and the bighorn sheep entered into the mythology of Native Americans.  By 1900, the population had crashed to several thousand, due to diseases introduced through European livestock and overhunting. 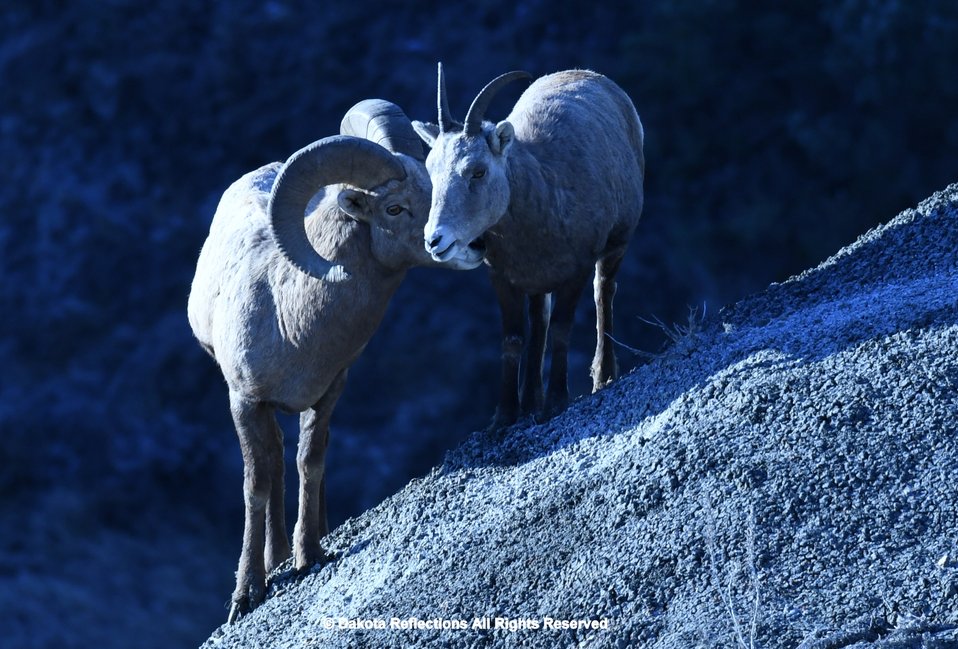 Bighorn sheep are highly susceptible to certain diseases carried by domestic sheep, such as psoroptic scabies and pneumonia; additional mortality occurs as a result of accidents involving rock falls or falling off cliffs (a hazard of living in steep, rugged terrain).  Bighorns are well adapted to climbing steep terrain, where they seek cover from predators.  Predation primarily occurs with lambs, which are hunted by coyotes, bobcats, lynxes, and golden eagles.  Bighorn sheep of all ages are threatened by bears, wolves, and especially cougars, which are perhaps best equipped with the agility to prey on them in uneven, rocky habitats.  They are considered good indicators of land health because the species is sensitive to many human-induced environmental problems.  Bighorn sheep graze on grasses and browse shrubs, particularly in fall and winter, and seek minerals at natural salt licks.  Females tend to forage and walk, possibly to avoid predators and protect lambs, while males tend to eat and then rest and ruminate, which lends to more effective digestion and greater increase in body size 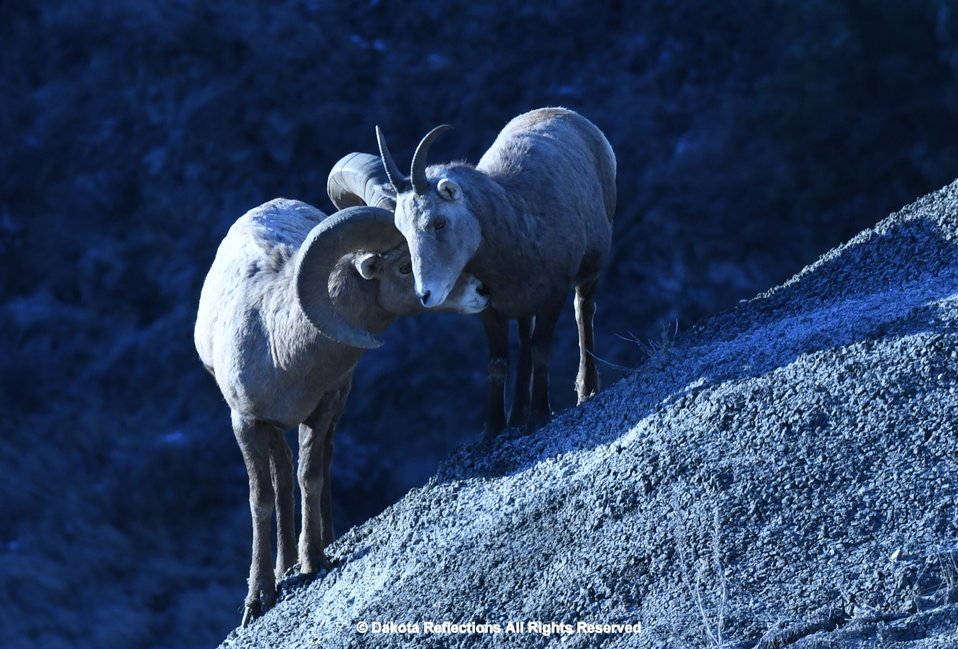 North Dakota's bighorn sheep population stands at a minimum of 283 in western North Dakota, up 7 percent from 2017 and equal to the five-year average, the state Game and Fish Department said Monday in reporting results from its 2018 bighorn sheep survey.  Biologists counted 84 rams, 161 ewes and 38 lambs. Not included are approximately 20 bighorns in the North Unit of Theodore Roosevelt National Park.  Big game biologist Brett Wiedmann said he was pleased to see an increase in the survey, after a decline in 2017.  "The increase in the 2018 count reflects lessening effects of bacterial pneumonia that was detected in 2014," Wiedmann said.  The northern Badlands population increased 9 percent from 2017 and was the second highest count on record, the department said. The southern Badlands population declined again to the lowest level since 1999.  "The total count of adult rams declined in 2018 but adult ewes increased," Wiedmann said. "Most encouraging was the significant increase in the lamb count and recruitment rate following record lows in 2016 and 2017."  Game and Fish Department biologists count and classify all bighorn sheep in late summer and then recount lambs the following March, as they approach 1 year of age, to determine recruitment.  "Fortunately, annual survival rates of adult bighorns are similar to those prior to the die-off, and lamb survival is improving, which could indicate the population is becoming somewhat resilient to the deadly pathogens first observed in 2014," Wiedmann said. "The next few years will be important in determining if the state's population shows signs of recovering from the disease outbreak, or if the pathogens are likely to persist and cause a long-term population decline."  Four of the 15 adult bighorns tested for the deadly pathogens last winter were positive, said Dr. Charlie Bahnson, Game and Fish wildlife veterinarian.

An outbreak of deadly bacterial pneumonia that has plagued western North Dakota's bighorn sheep population for years is showing signs of waning, though it might still be a few years before the herd is out of the woods. 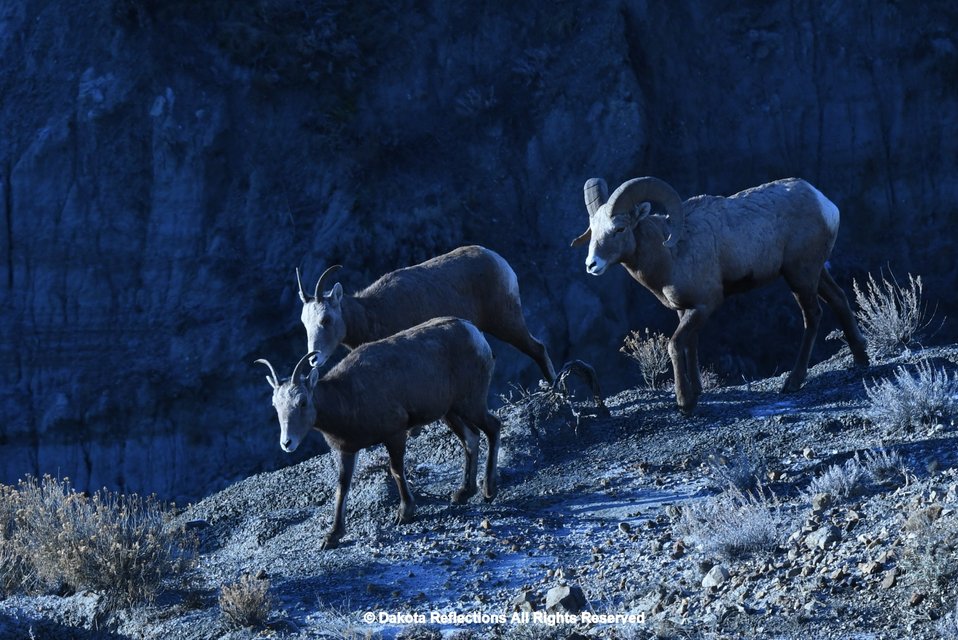 Bighorn sheep live in large herds, and do not typically follow a single leader ram, unlike the mouflon, the ancestor of the domestic sheep, which has a strict dominance hierarchy. Prior to the mating season or "rut", the rams attempt to establish a dominance hierarchy to determine access to ewes for mating. During the prerut period, most of the characteristic horn clashing occurs between rams, although this behavior may occur to a limited extent throughout the year.  Bighorn sheep exhibit agonistic behavior: two competitors walk away from each other and then turn to face each other before jumping and lunging into headbutts.  Rams' horns can frequently exhibit damage from repeated clashes.  Females exhibit a stable, nonlinear hierarchy that correlates with age. 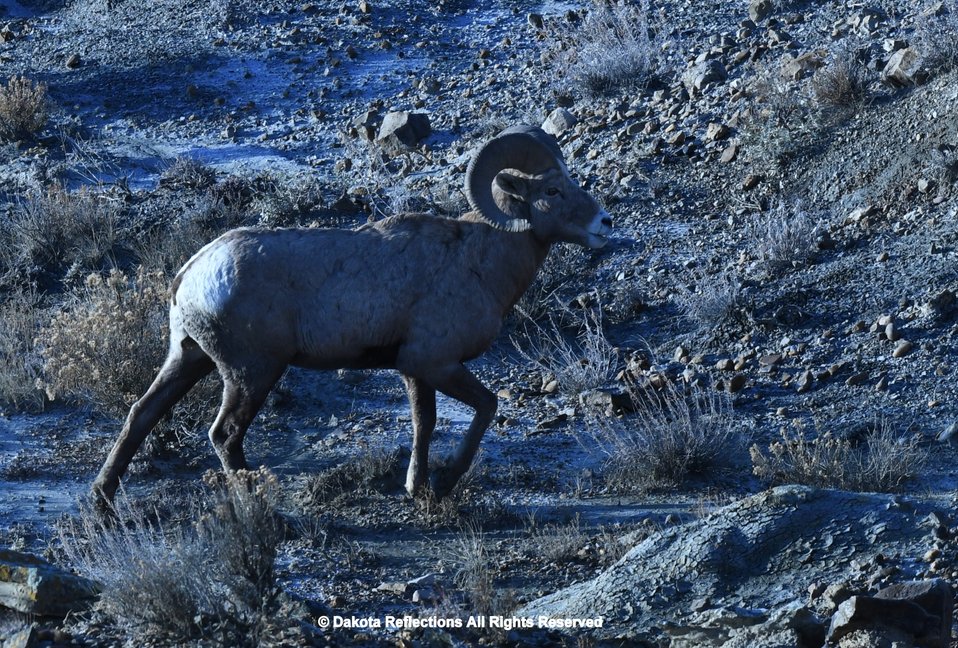 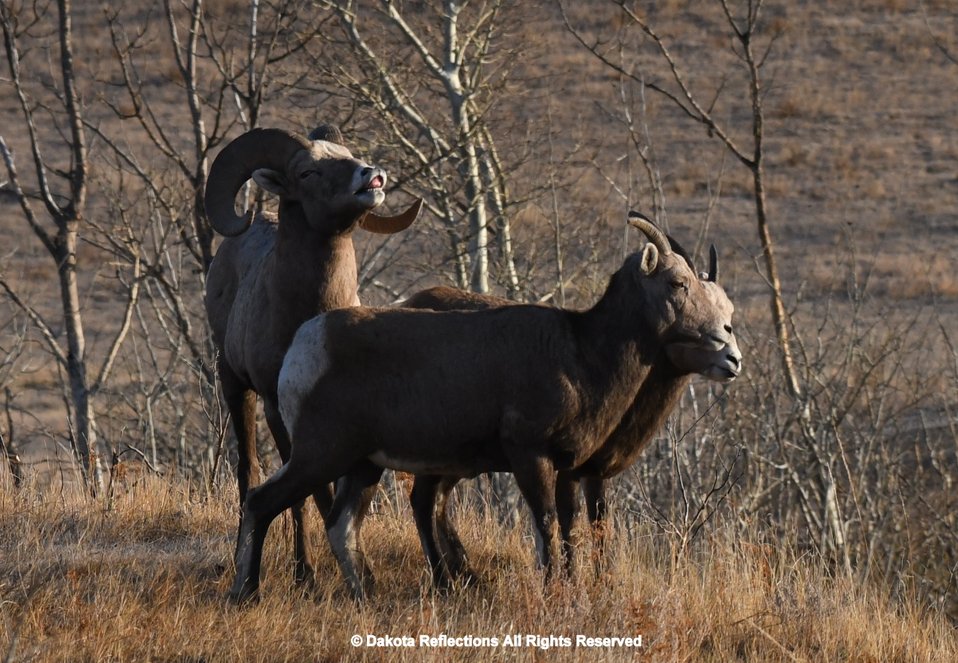 A dozen bighorn sheep have been moved out of an area near the north unit of Theodore Roosevelt National Park to reduce the potential for road kill.  Randy Kreil, wildlife division chief for the North Dakota Game and Fish Department, said while there have been bighorns in the area for several decades, at least six animals, including three mature rams, have been killed by vehicle collisions in recent years.  Brett Wiedmann, big game biologist for the Game and Fish Department, said two rams were killed in November along U.S. Highway 85 near the north unit.  Wiedmann said in 2006, 19 bighorns were introduced to the area from the Missouri Breaks area in Montana.  By 2009, the herd’s population had numbered 43 sheep, but it has been on the decline since that time.  A helicopter crew captured 12 sheep the week of Feb. 18 and they were transported by horse trailers to an area about 25 miles to the southwest near Buckhorn Creek, Kreil said.  Kreil said a similar transfer was done in 2010, moving 14 sheep out of the area.  Kreil said the road kills have coincided with an increase in overall traffic in the area.  The sheep were in an area near Mormon Butte. Kreil said it’s common for the bighorns to move daily and seasonally, especially during mating season.  “It was rare to have a collision, though,” he said.  Kreil said the decision to move the sheep was made because the helicopter crew was in the area capturing mule deer for a study to track their movement.  That study is being conducted to determine the effect that oil and gas exploration have on the movement of mule deer that, like bighorns, use certain corridors during different times of the year.  Kreil said the Mormon Butte area is some of the best bighorn habitat in the Badlands.  There may have been more bighorns that were lost in the past few years that went unreported, Kreil said, but the sheep that were moved onto the Little Missouri Grasslands have had good lambing success.  He said there is a still a small herd in the area of the north unit, about 30 animals.  Overall, Kreil said the population of bighorn sheep in North Dakota numbers about 300.  Kreil said the operation cost about $8,000 with an additional $1,000 for radio collars.