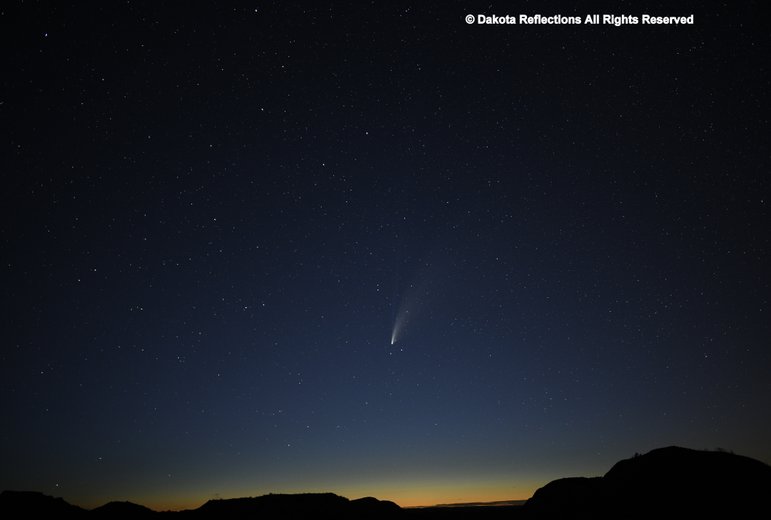 C/2020 F3 (NEOWISE) or Comet NEOWISE is a comet discovered on March 27, 2020, by astronomers during the NEOWISE mission of the Wide-field Infrared Survey Explorer (WISE) space telescope.  It has the systematic designation C/2020 F3, indicating a non-periodic comet which was the third discovered in the second half of March 2020.

For observers in the northern hemisphere, in the morning, the comet appears very low above the north-eastern horizon, below Capella. In the evening, the comet can be seen low in the north-western sky. The comet can be seen in the morning and evening because it is circumpolar north of the 45th parallel north. On July 17, Comet NEOWISE entered the constellation of Ursa Major, below the asterism of the Big Dipper (The Plough).

By early July, Comet NEOWISE had brightened to magnitude 1, far exceeding the brightness attained by previous comets, C/2020 F8 (SWAN), and C/2019 Y4 (ATLAS). By July, it also had developed a second tail. The first tail is blue and made of gas and ions. There is also a red separation in the tail caused by high amounts of sodium. The second twin tail is a golden color and is made of dust, like the tail of Comet Hale–Bopp.

On July 13, 2020, a sodium tail was confirmed by the Planetary Science Institute's Input/Output facility.  Sodium tails have only been observed in very bright comets like Hale–Bopp and sungrazer C/2012 S1 (ISON).  By July 5, NASA's Parker Solar Probe had captured an image of the comet, from which astronomers also estimated the diameter of the comet nucleus at approximately 5 km (3 mi). 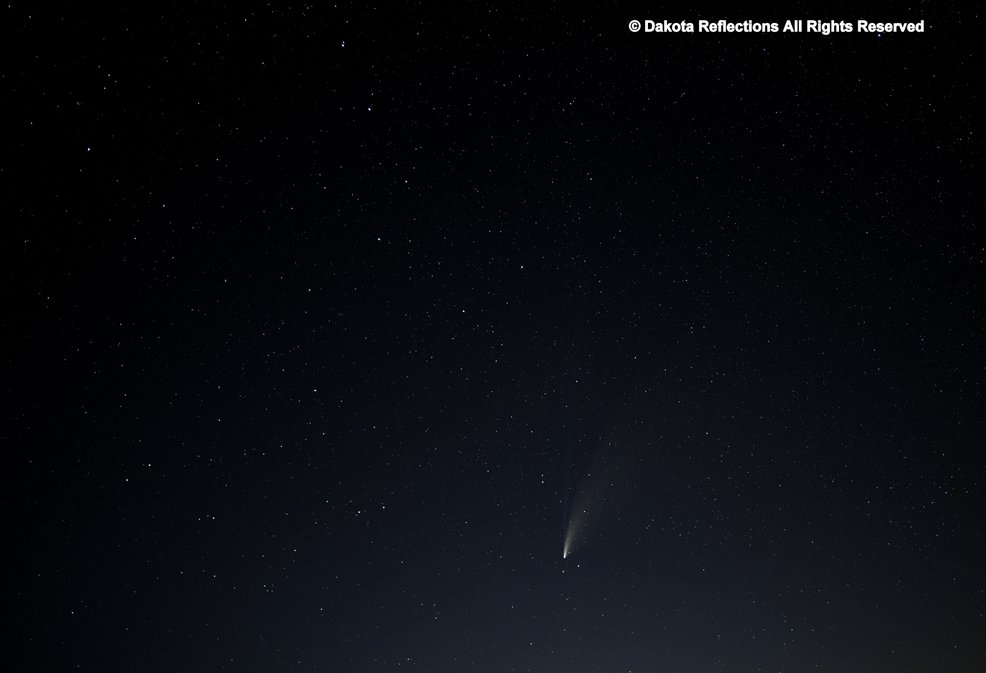 Big Dipper is seen in upper left central of photograph 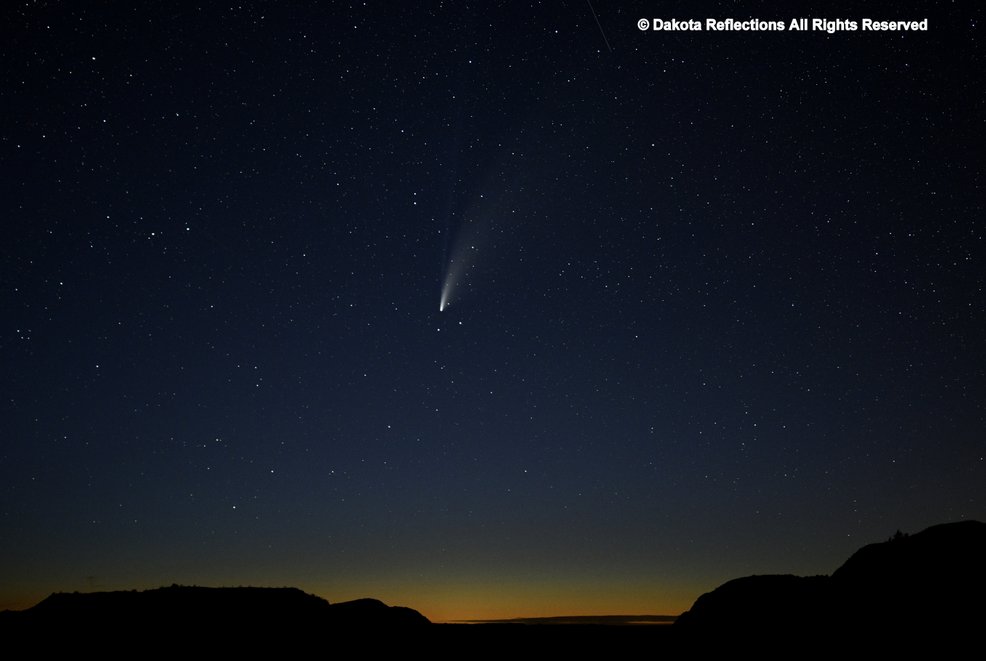 One of the most fascinating details about Comet NEOWISE is that it won't return to our skies for another 6,800 years. But that's not the only thing that makes this icy space rock special.  Comets, often nicknamed "cosmic snowballs," are icy, rocky objects made up of ice, rock and dust. These objects orbit the sun, and as they slip closer to the sun most comets heat up and start streaming two tails, one made of dust and gas and an "ion tail" made of electrically-charged gas molecules, or ions.

As a comet nears the sun, it warms up and material pulls away from the surface into a tail. Often, dust is pulled away along with gases from sublimating (going directly from solid to a gas) ice. This dust tail is the sweeping trail seen in most comet images. Comets also have an ion tail made up of ionized gas blown back by the solar wind. 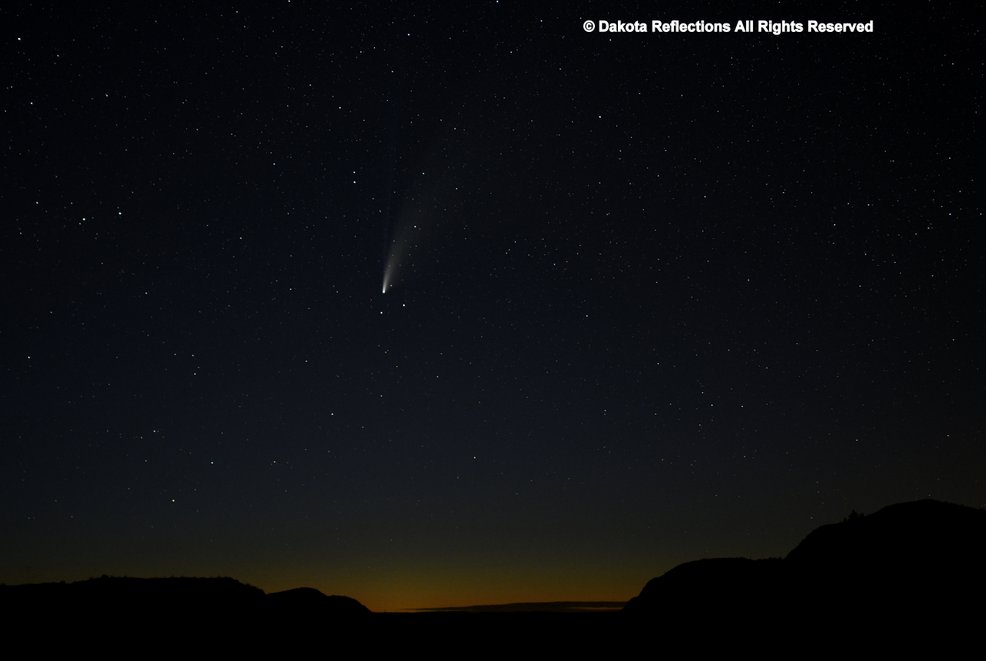 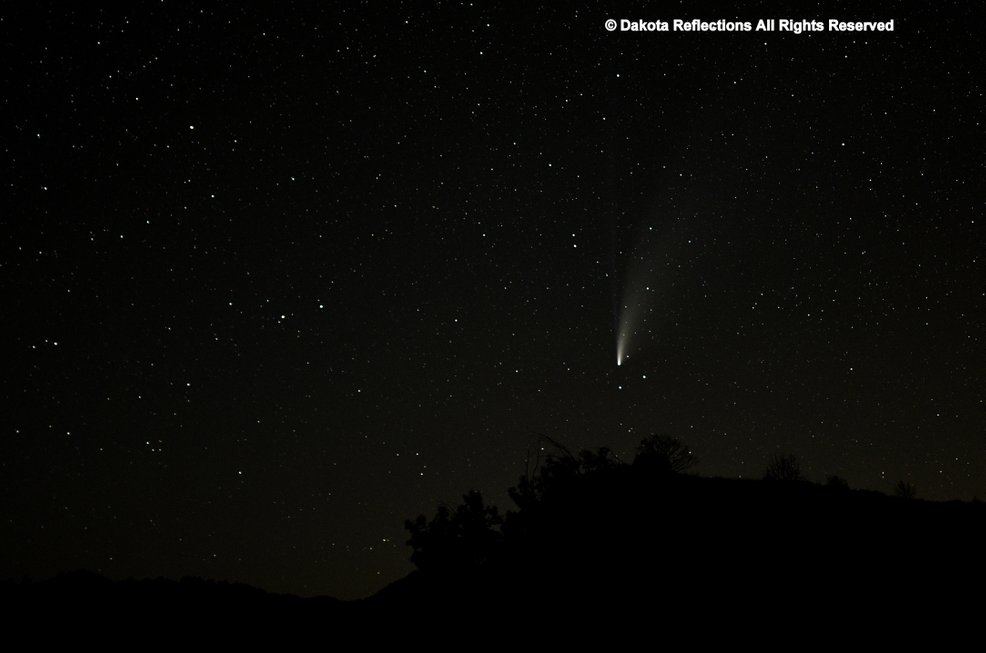 Why does Comet Neowise have Two Tails?

First documented by Tycho Brahe (1546- 1601) in the late 1500s, comets have two tails, both always pointing directly away from the sun. The main tail on Neowise's right appears grey/white in color. The second tail on the left is faint, blue and in a straight line. The main tail is caused by the sun's radiation expelling dust from the comet. The smaller tail is caused by the sun's ultraviolet light ionizing carbon monoxide and creating an ion tail. Comet Neowise is 3 miles in diameter, traveling at 144,000 mph, and will return in 6,800 years! 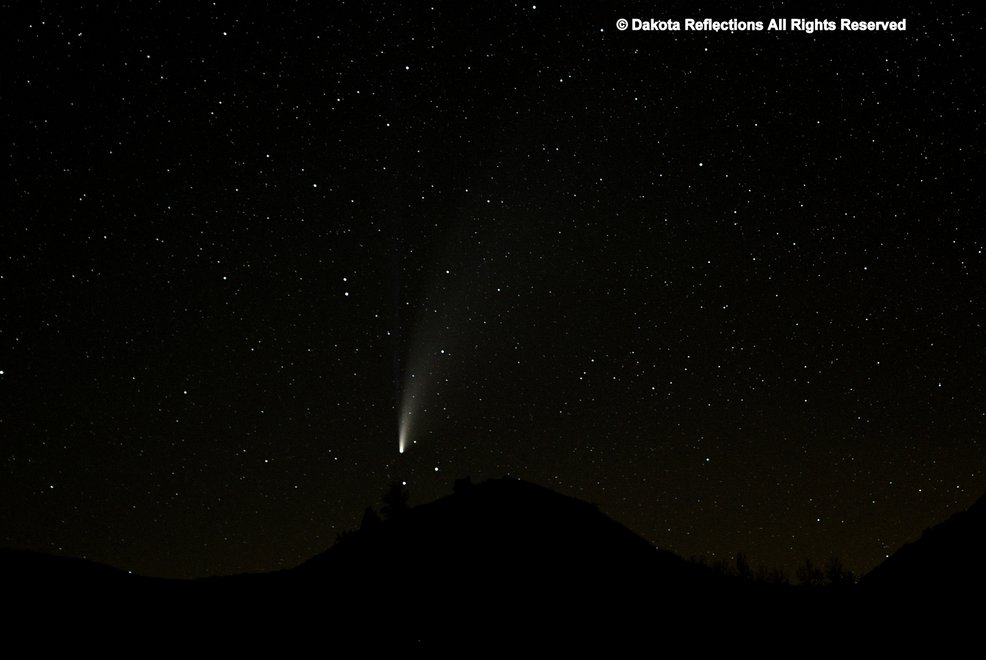 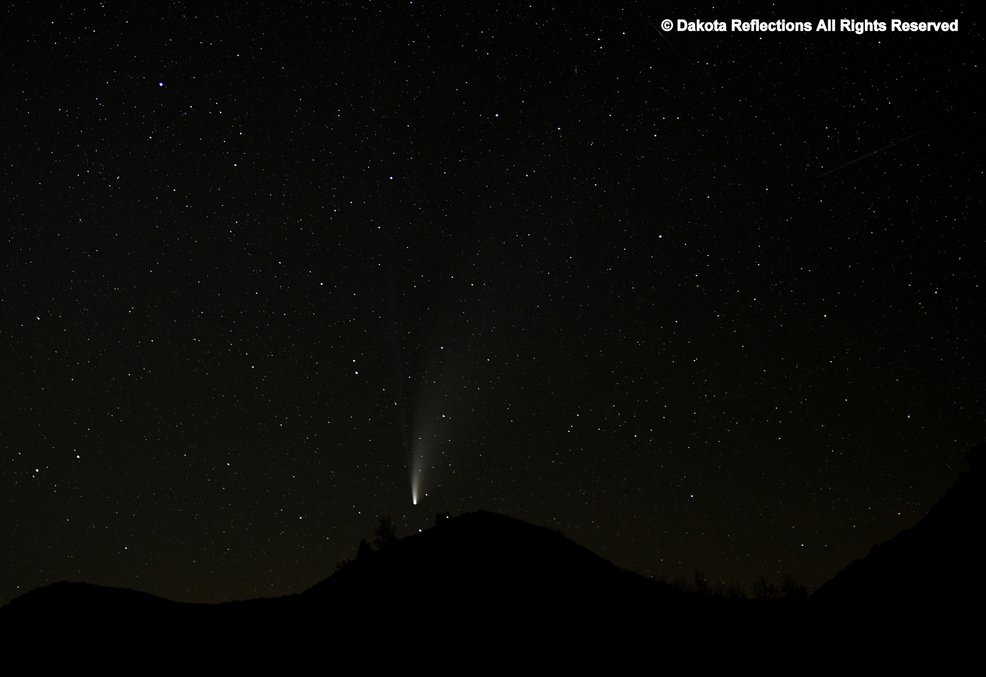 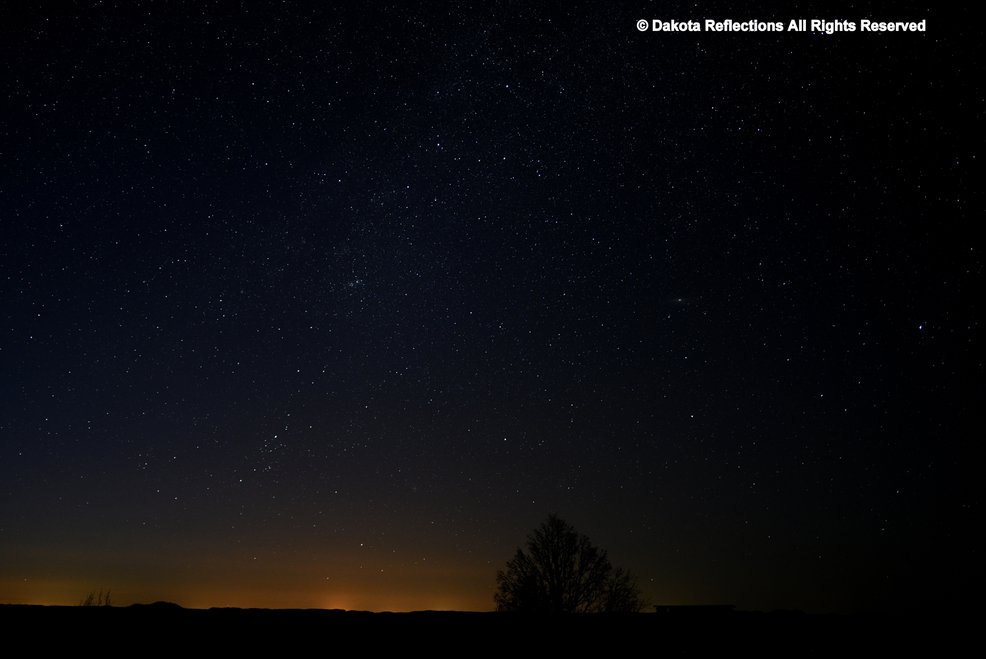 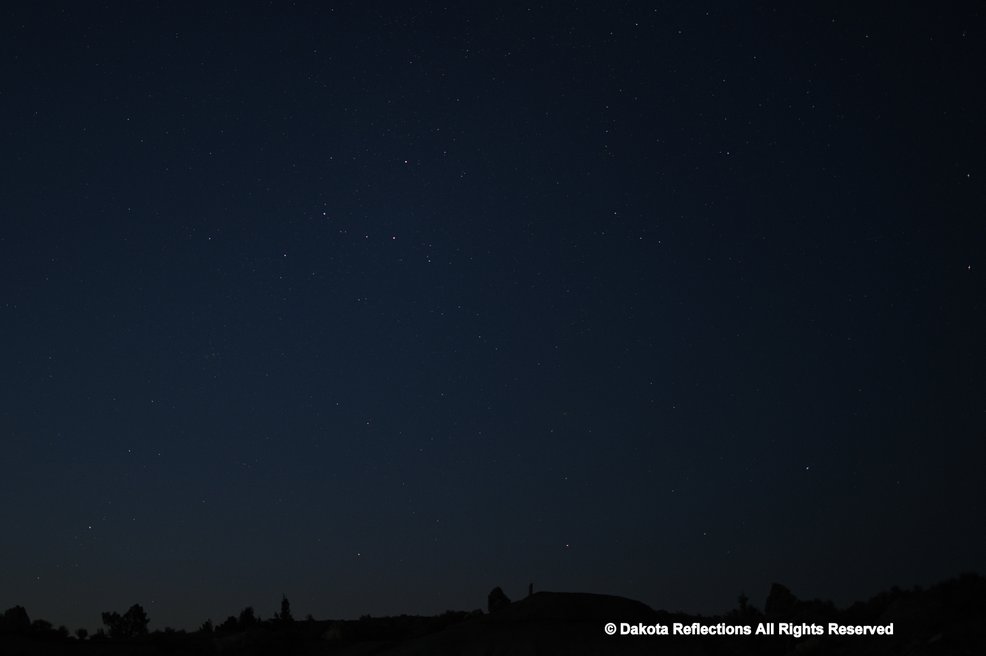 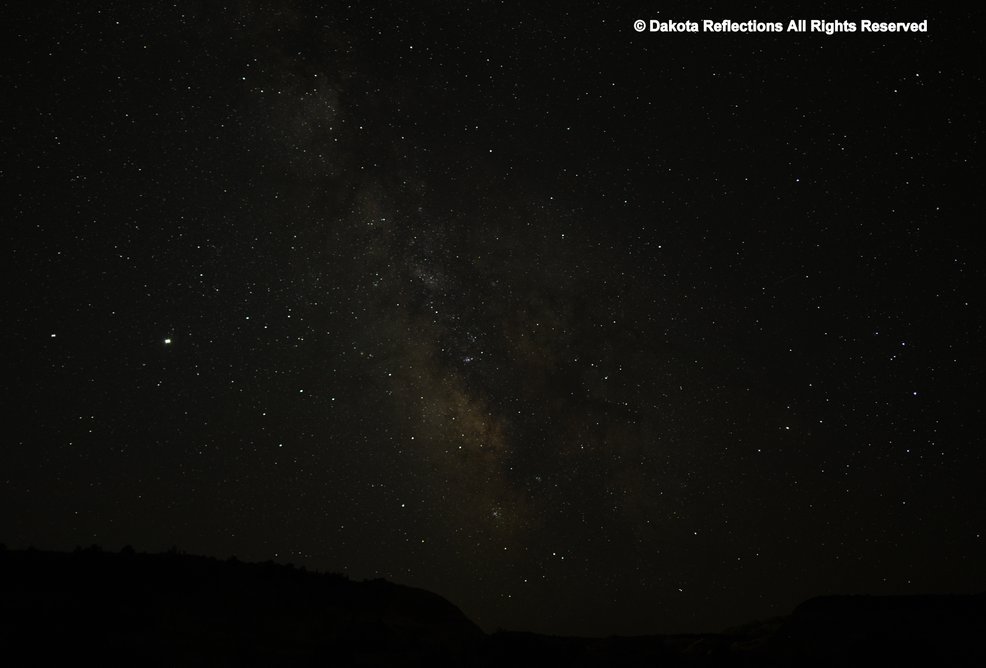 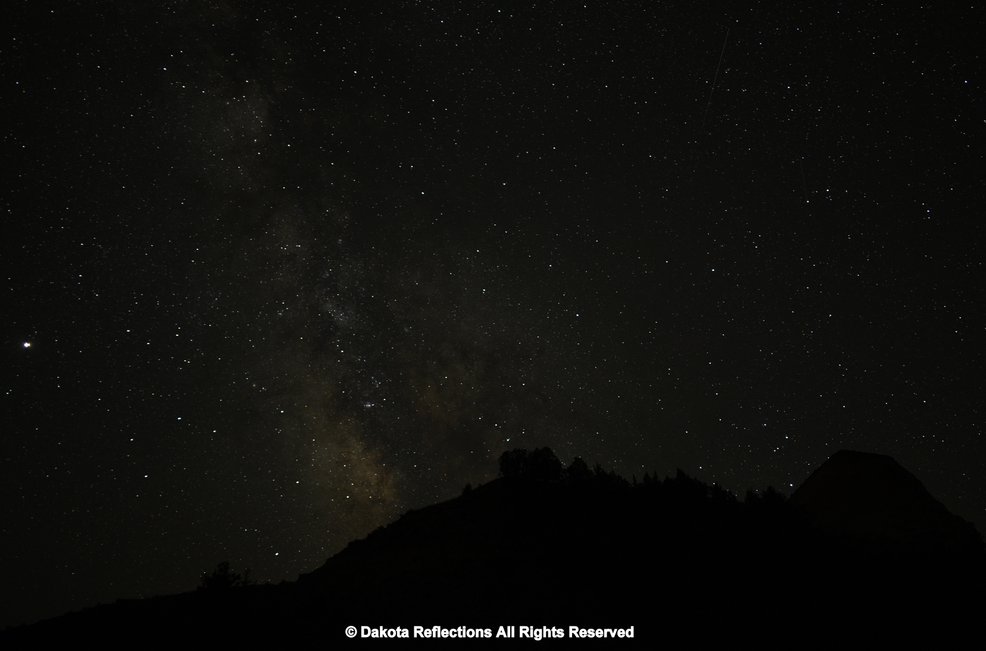 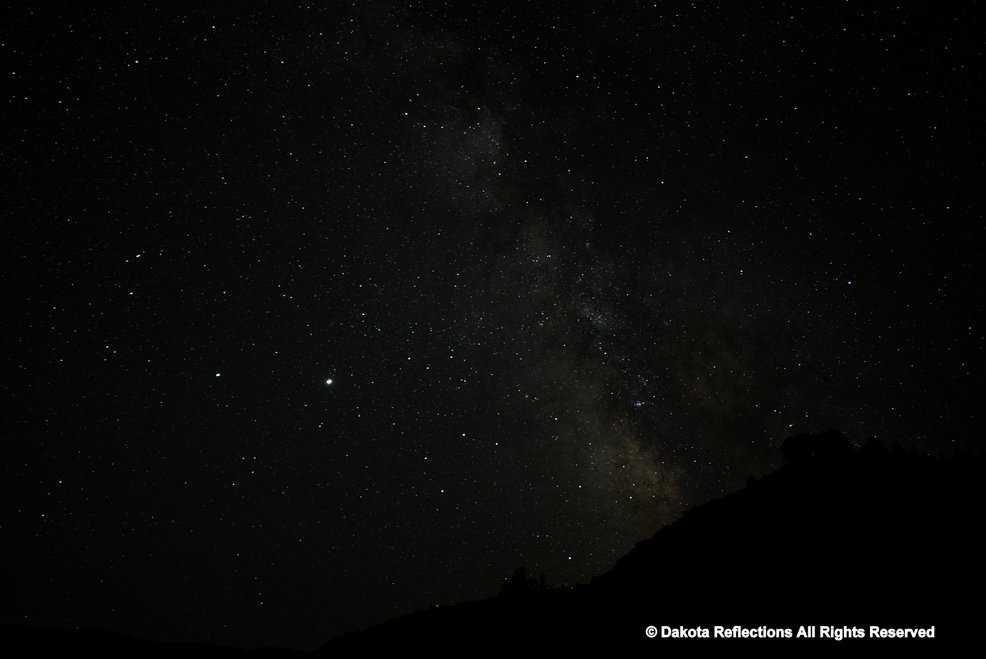 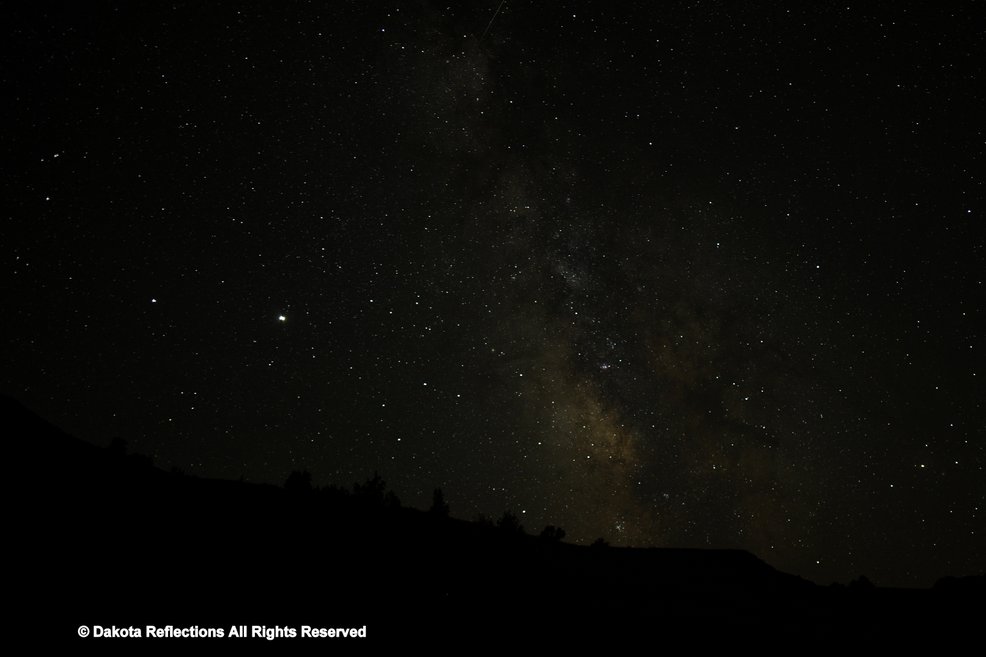 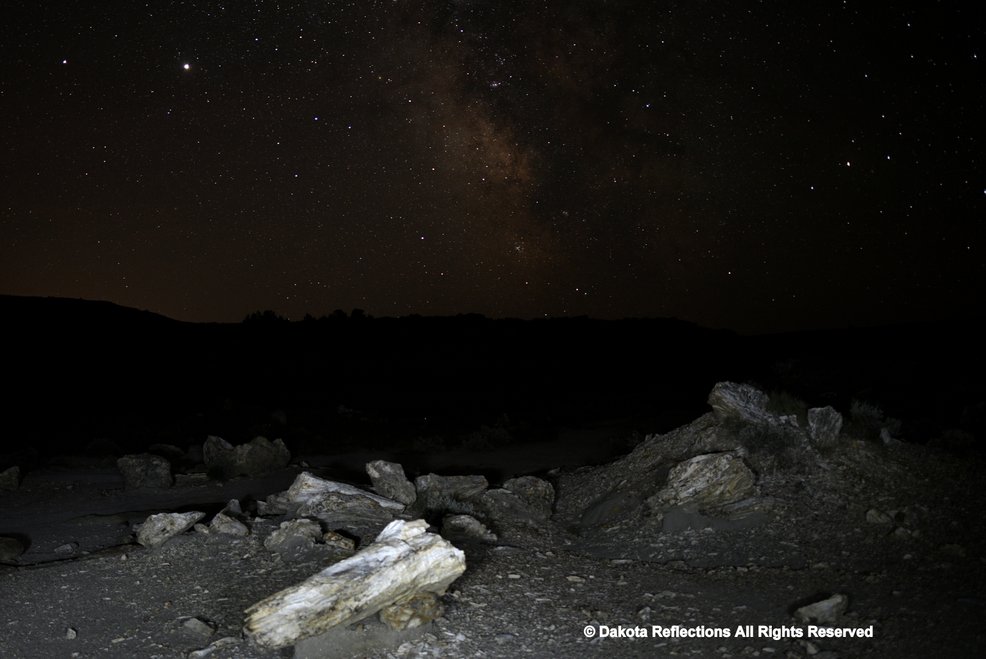 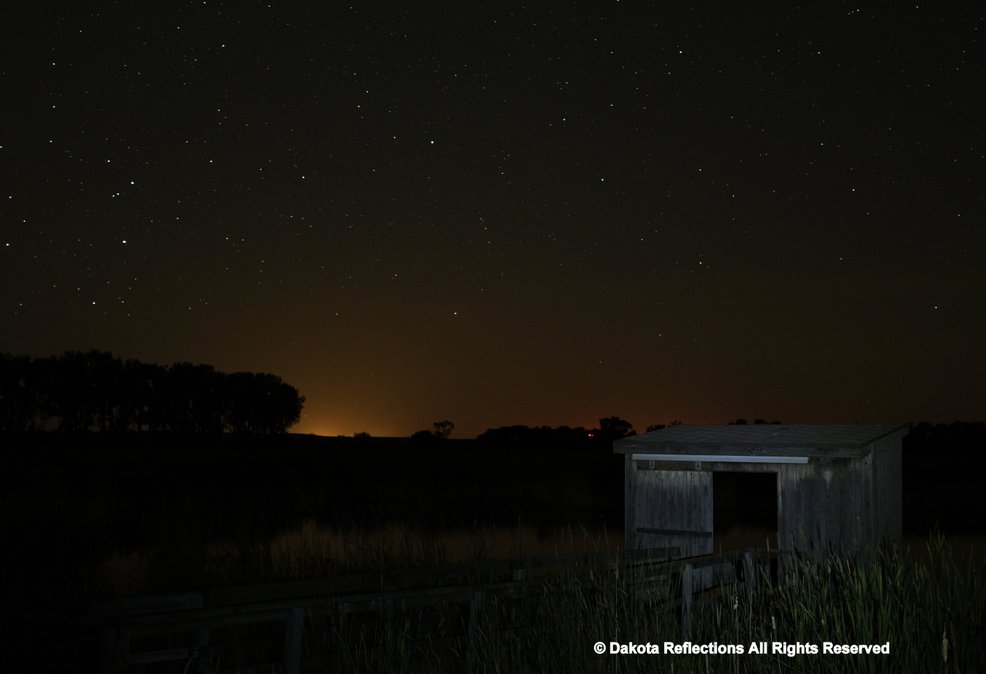 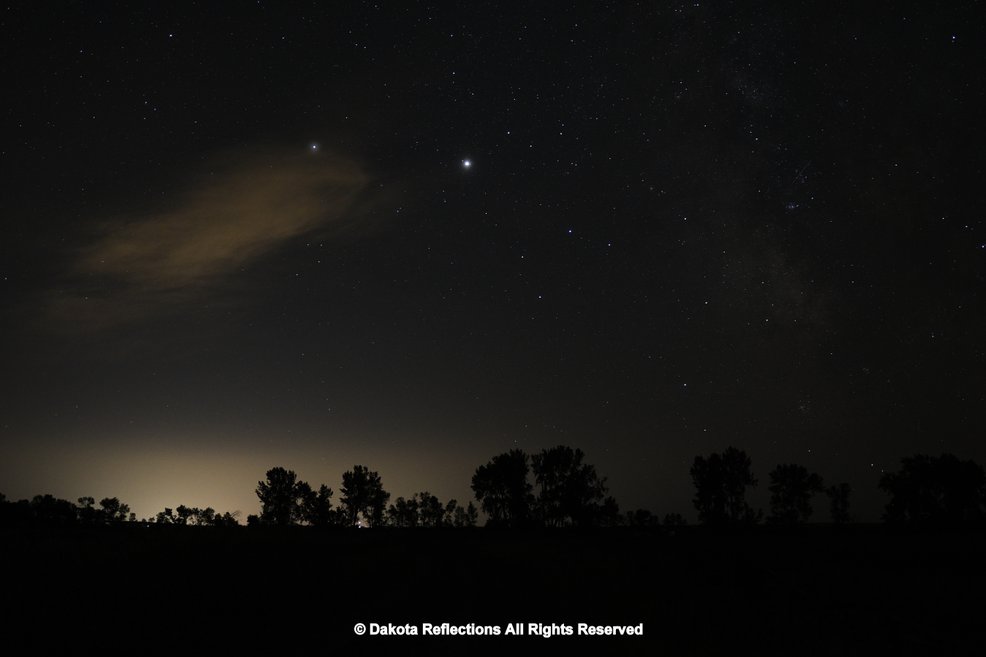 This photograph was taken on Saturday night, photo of the day for August 15, 2020. In the top center, the bright light is the planet Jupiter. To its left is the planet Saturn. The glow in the left lower area is from the lights of Bismarck. The asterism "The Teapot" is to the lower right of Jupiter and is composed of the brightest stars of the constellation Sagittarius. To the right of "The Teapot" is the Milky Way. 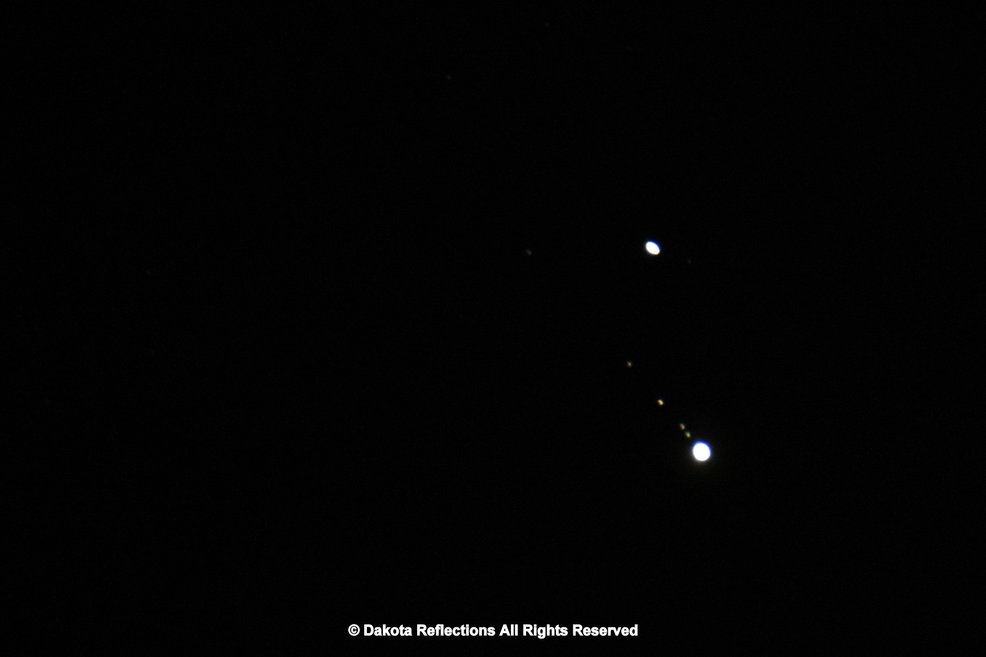 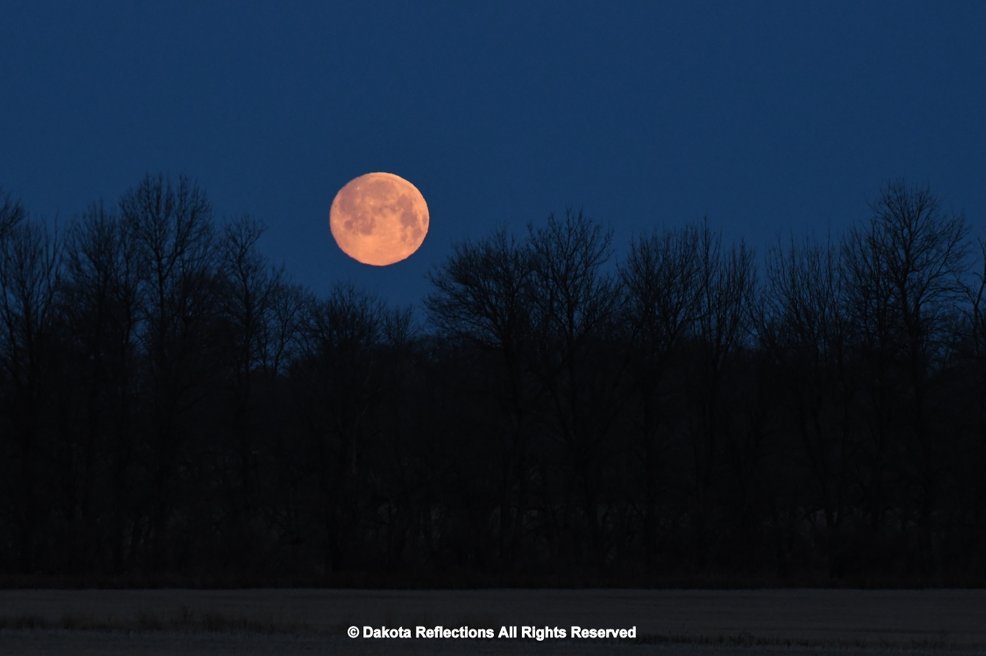 Sometimes, when the moon is setting, it will pick up some reddish light (longer wavelength gets through our atmosphere better) from the sunrise. 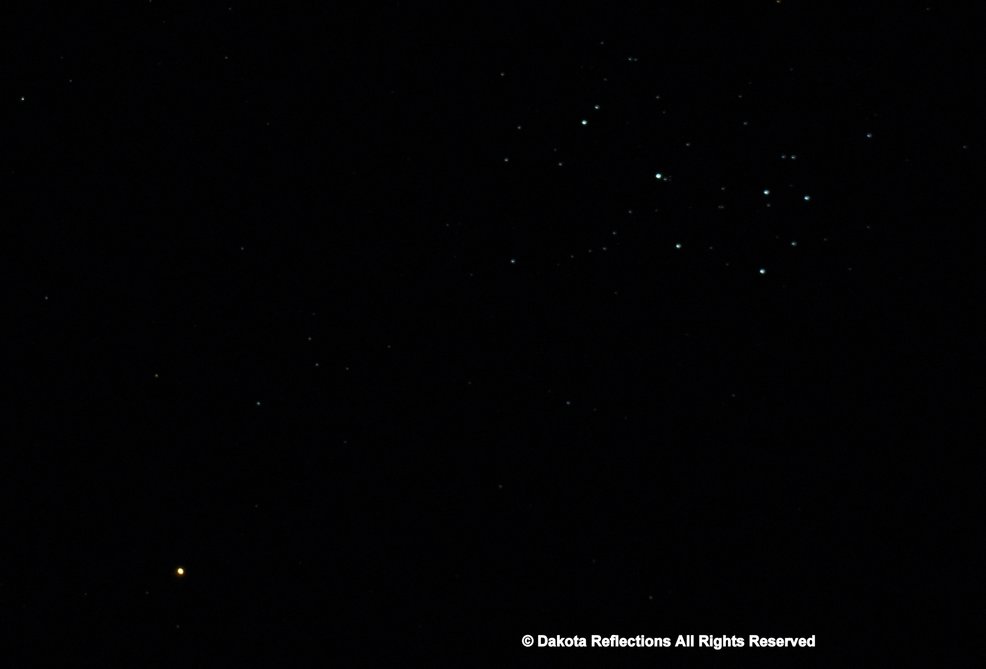 Mars and the Seven Sisters

The Pleiades also known as the Seven Sisters and Messier 45, is an open star cluster containing middle-aged, hot B-type stars in the north-west of the constellation Taurus. It is among the star clusters nearest to Earth, it is the nearest Messier object to Earth, and is the cluster most obvious to the naked eye in the night sky.  The cluster is dominated by hot blue and luminous stars that have formed within the last 100 million years. Reflection nebulae around the brightest stars were once thought to be left over material from their formation, but are now considered likely to be an unrelated dust cloud in the interstellar medium through which the stars are currently passing.

The Pleiades were the seven daughters of the titan Atlas and the sea-nymph Pleione born on Mount Cyllene.  After Atlas was forced to carry the heavens on his shoulders, Orion began to pursue all of the Pleiades, and Zeus transformed them first into doves, and then into stars to comfort their father. The constellation of Orion is said to still pursue them across the night sky. 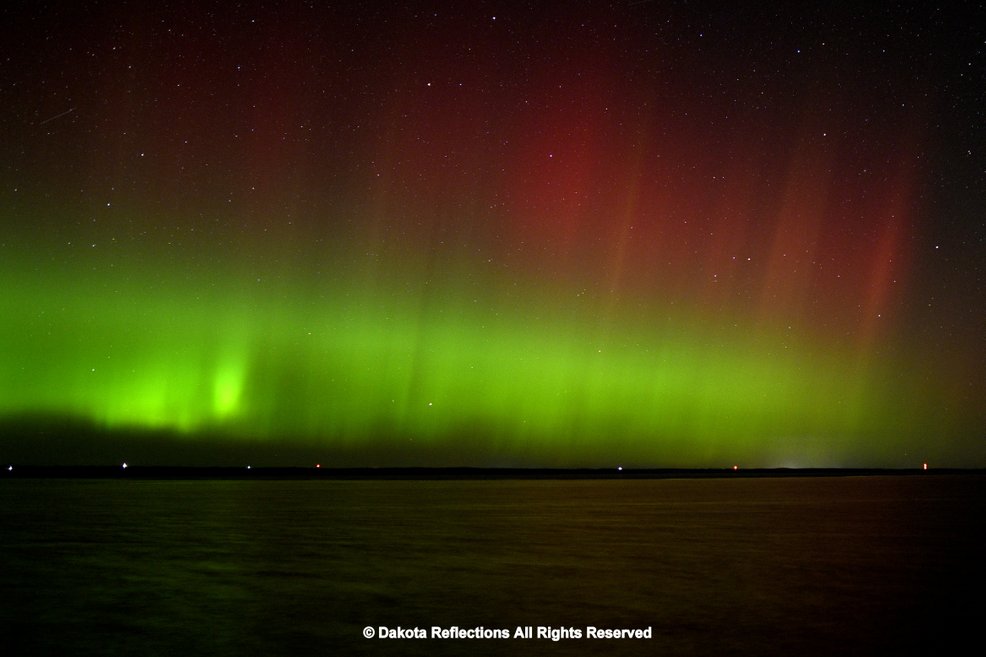 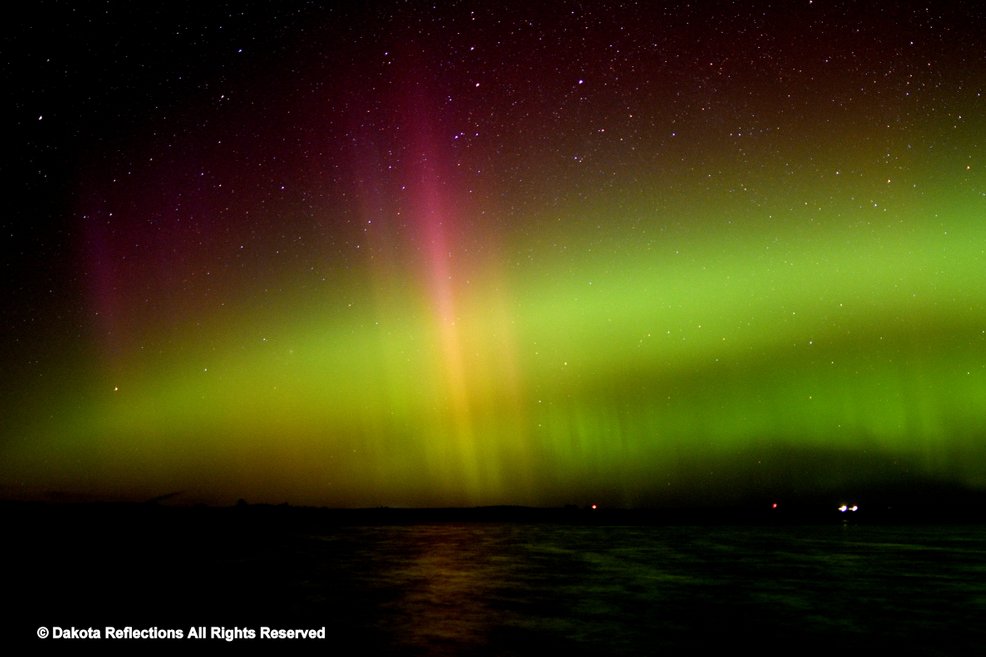 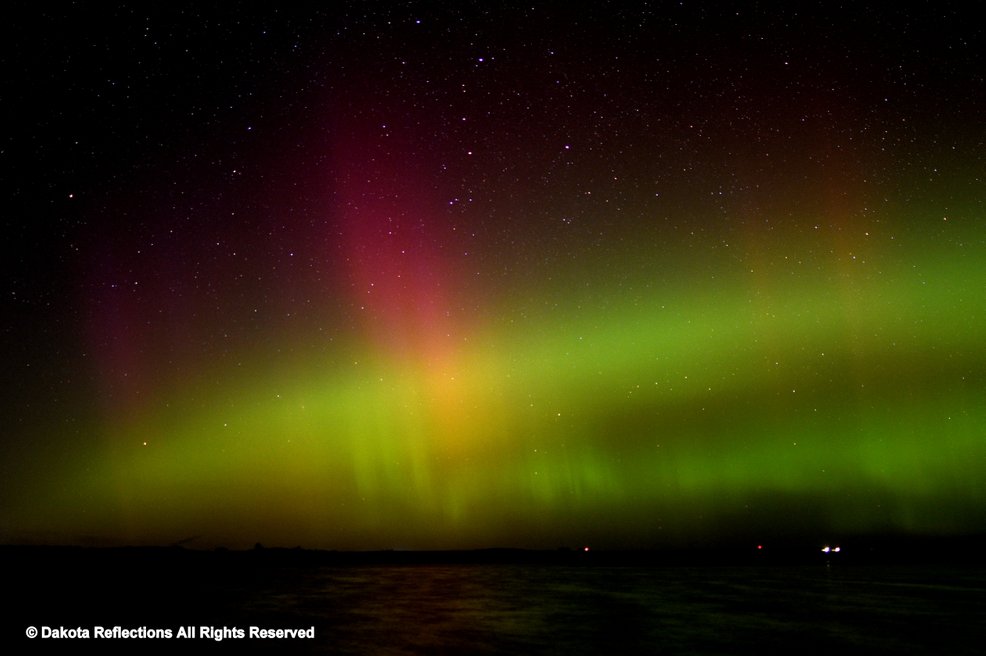 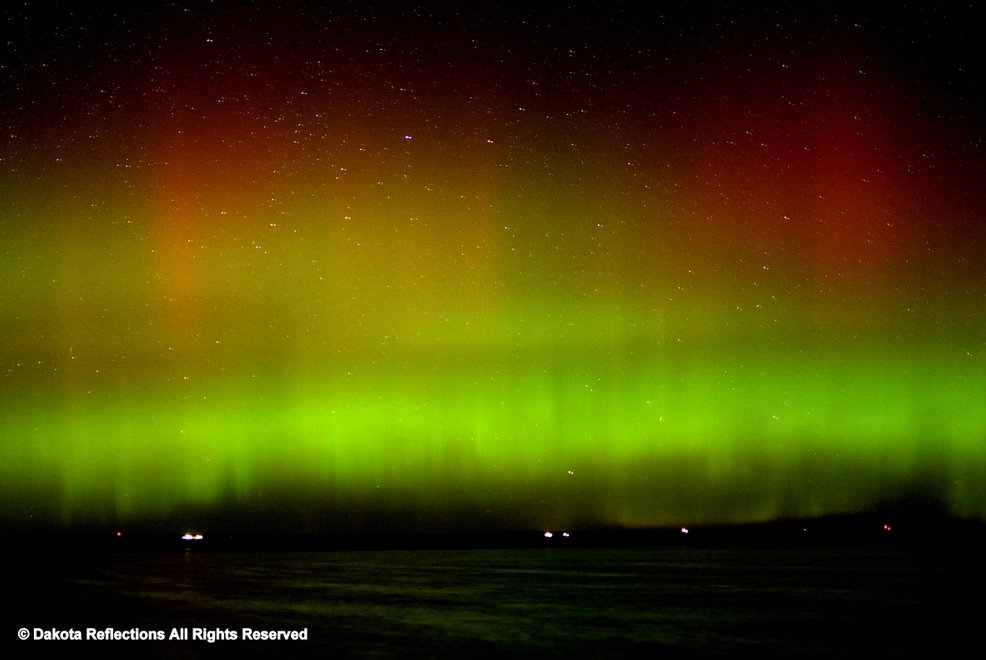 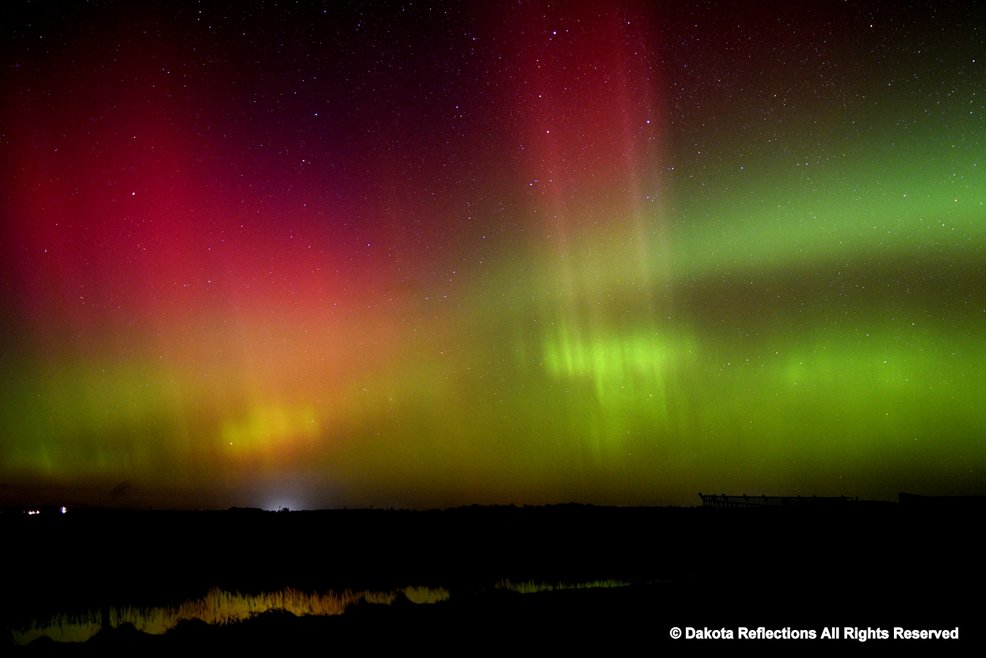 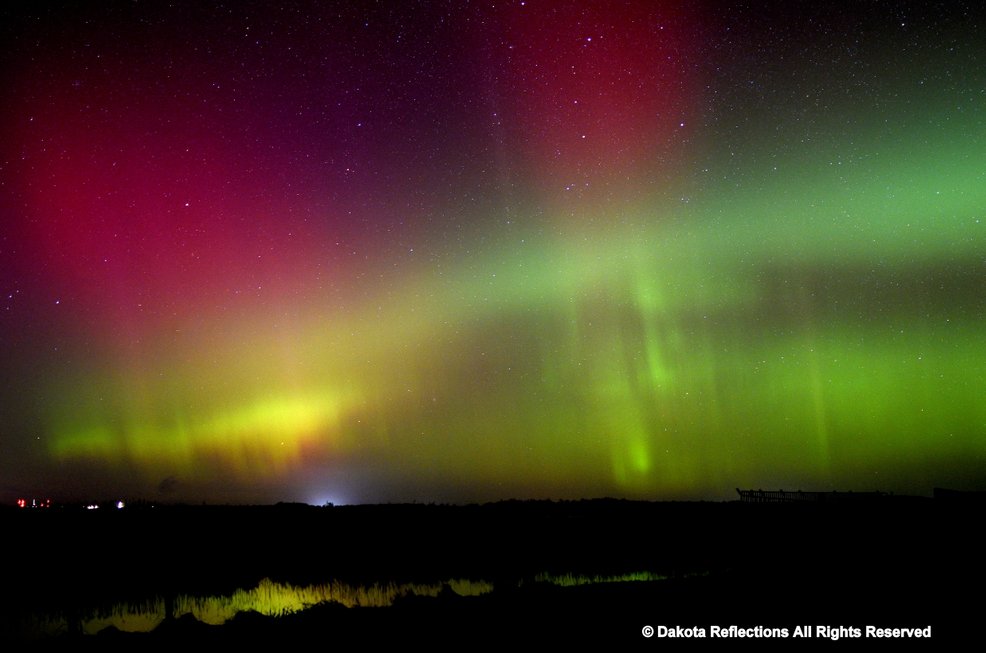 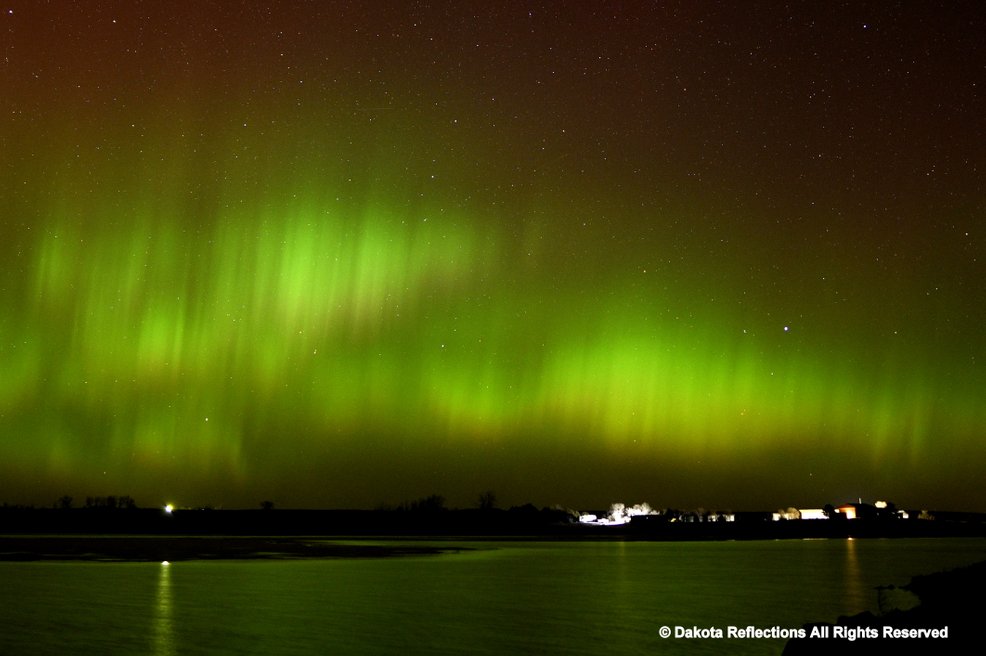 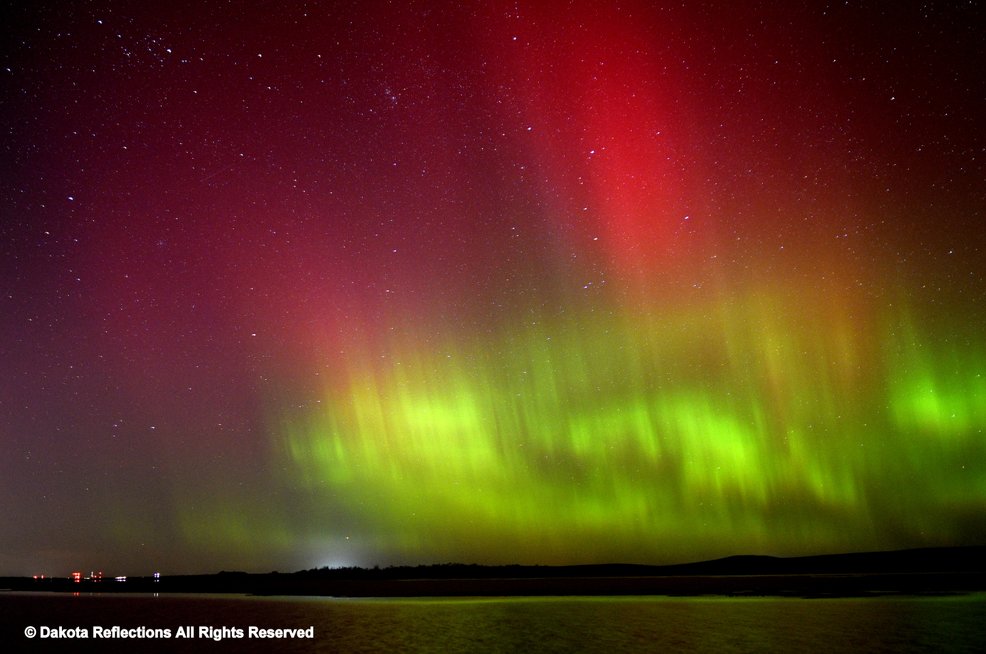 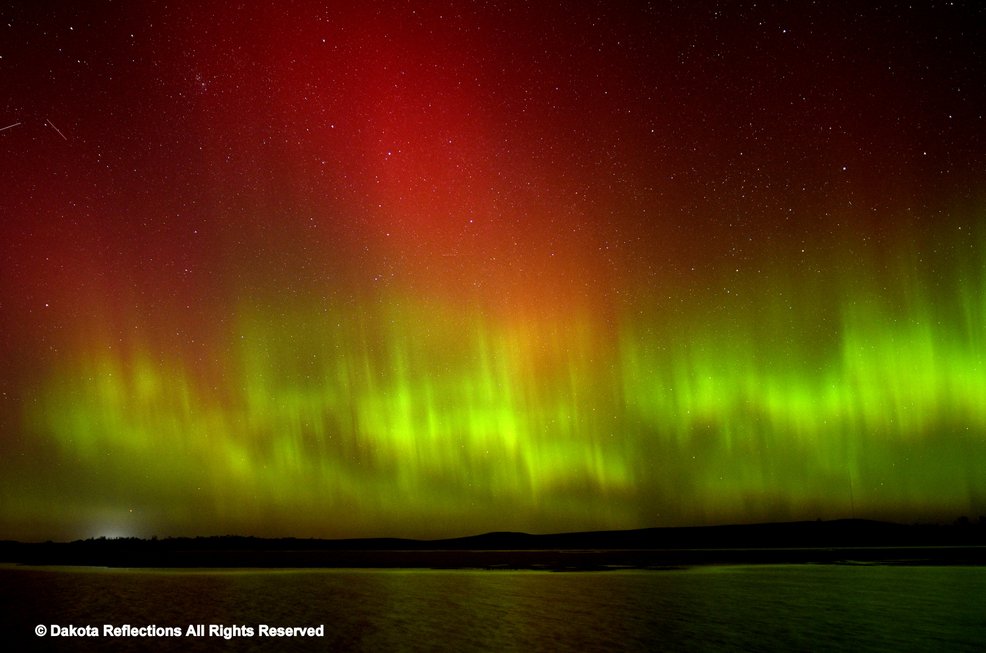 Oxygen gives off the fluorescent green and yellow color of the aurora (most common) when hit by electrons in the solar system. Nitrogen causes blue or red colours and sometimes pink, while neon turns them orange. 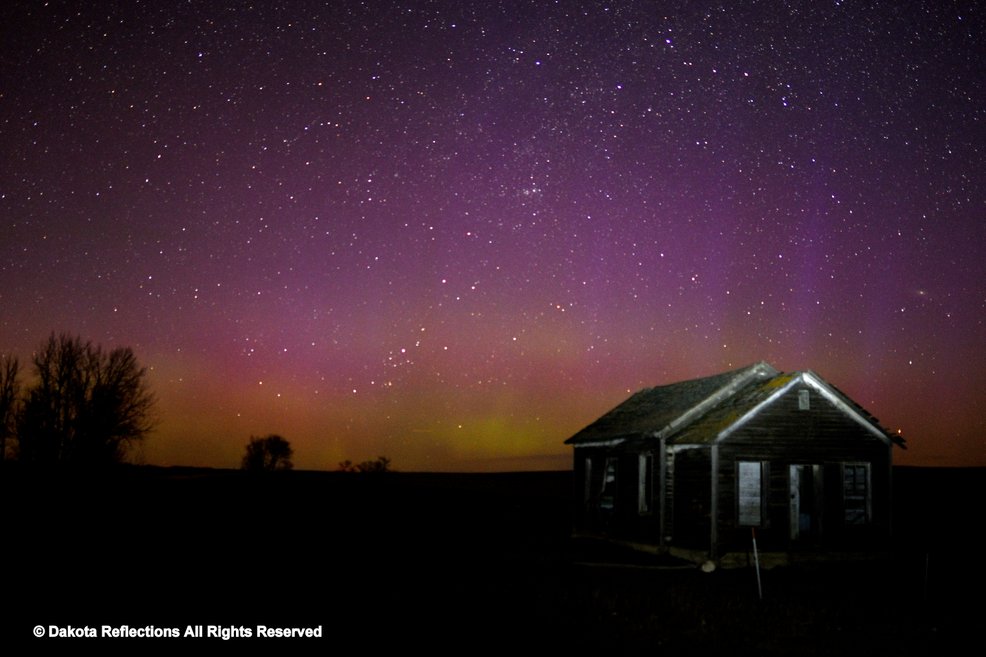